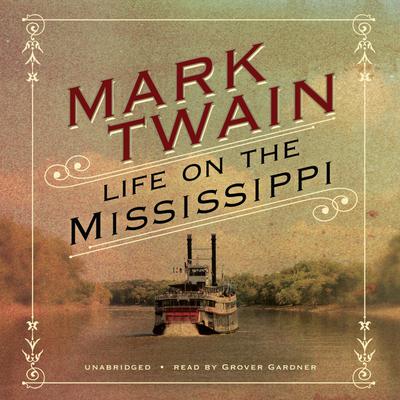 Life on the Mississippi (Digital Audiobook)

The Mississippi River, known as “America’s river,” and Mark Twain are practically synonymous in American culture. The popularity of Twain’s steamboat and steamboat pilot on the ever-changing Mississippi has endured for over a century.

A brilliant amalgam of remembrance and reportage, by turns satiric, celebratory, nostalgic, and melancholy, Life on the Mississippi evokes the great river that Mark Twain knew as a boy and young man and the one he revisited as a mature and successful author. Written between the publication of his two greatest novels, Tom Sawyer and Huckleberry Finn, Twain’s rich portrait of the Mississippi marks a distinctive transition in the life of the river and the nation, from the boom years preceding the Civil War to the sober times that followed it.

Samuel Clemens became a licensed river pilot at the age of twenty-four under the apprenticeship of Horace Bixby, pilot of the Paul Jones. His name, Mark Twain, was derived from the river pilot term describing safe navigating conditions, or “mark two fathoms.” This term was shortened to “mark twain” by the leadsmen whose job it was to monitor the water’s depth and report it to the pilot.

Although Mark Twain used his childhood experiences growing up along the Mississippi in numerous works, nowhere is the river and the pilot’s life more thoroughly described than in Life on the Mississippi.