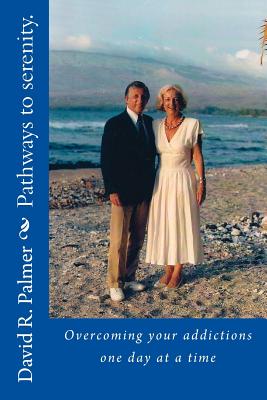 Pathways to serenity. Overcoming your addictions one day at a time (Paperback)

This book is mainly about people who have experienced the blessings and joy of recovery from their addictions, how they did it, and how you can do it. My purpose in writing it is to give you, the reader, hope and encouragement. The rest is up to you. You will find my story, the one I tell at 12-Step meetings, in appendix 1 of the book. I hope you will conclude when you read it that, "If this guy can do it, I can, too." There are also nineteen chapters in the book that will help you better understand the resources available to you. There are chapters, for example, on people we are especially interested in-adolescents, veterans, and prison inmates-and about programs like Alcoholics Anonymous, Al-Anon, and Celebrate Recovery. I call these chapters "pathways to serenity" in the title of the book and emphasize taking it no more than "one day at a time," a vital key to recovery. The photo of my wife and me on the cover is meant to reassure those who seek recovery that there can be happiness after you drop the alcohol, drugs, or other addictions. And there will be moments of serenity, but not every moment. That's where the "one day at a time" comes in. The stories about people and programs are snapshots. People and programs change; some in recovery have slips and may never come back, while others succeed. It is also true that some programs succeed while others fade away. That's life, and readers must take this into account in charting their own recovery. This, then, is a freeze frame of people dealing effectively with their addictions through programs that work. We must remember that they are contending with an adversary-addiction-which chapter 5 of the Big Book of Alcoholics Anonymous describes as "cunning, baffling and powerful." Maybe so, but we have access to the God of the universe. The late Joe McQuany, who wrote a text book on recovery used by treatment centers, travelled the world over carrying the message, helped integrate AA meetings in the deep south and taught what the 12 Steps of AA, had this to say about God and man. "I look at the battles that go on in life, and I look at the resentments and fears, guilt, and remorse, and how these things block us from God and shackle us to the self. Then I look at love, tolerance, patience, courage, and wisdom. These qualities have come from God and they are always within us. In our outer and inner conflicts, we can see the powers of self-contending with the powers of God." Amen.

David Palmer, chairman of the board, president, and founder of One Day at a Time in 2004, has been involved in newspaper publishing and public relations and advertising for his entire career. Before joining the Little Rock, Arkansas, firm of Cranford Johnson Robinson Woods as a senior consultant in 1986, David was business and financial writer for the Arkansas Gazette and a correspondent for the Wall Street Journal. Prior to that, David published a chain of weekly newspapers in northern Virginia and later served as publisher of the News-Times in El Dorado, Arkansas. He has also owned, published and edited newspapers in Raton, New Mexico; Lamar, Missouri; and Denville, New Jersey. David's first job was with Young & Rubicam Advertising in New York City. He also worked for Burson Marsteller and for Earl Newsom & Company in New York. David has been active in recovery circles for more than thirty years. He has been a member of the Wolfe Street Foundation, which provides 12-Step meeting rooms for those in recovery, since 1985 and served as president in 1990 and 1991. David is a Phi Beta Kappa graduate of Hamilton College in Clinton, New York, and the Harvard Graduate School of Business Administration in Boston. Following graduation, he served three years in the U.S. Navy. David and his wife, Joan, have three sons and seven grandchildren.
or
Buy Here
Copyright © 2020 American Booksellers Association