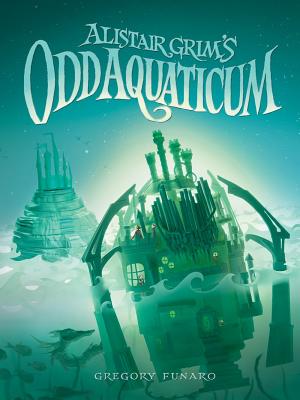 When Grubb, an orphan and runaway chimney sweep, entered the wondrous world of the Odditorium, his life changed forever. Apprenticed to the mechanical marvel's strange proprietor, Alistair Grim, Grubb unfortunately must settle into his new position on the lam, as all of England is convinced that Alistair Grim is a villain. Grim, however, has come up with a plan to expose the real villain: Prince Nightshade, a wicked necromancer who wants the Odditorium's power source for himself.

With the evil prince hot on their trail, Grim, Grubb and the rest of the Odditorium's crew embark on a perilous adventure to find the legendary sword Excalibur: the only weapon capable of penetrating Nightshade's magical suit of armor. As expected, their quest turns out to be anything but ordinary. Not only can the Odditorium fly, but it can also swim! And so the crew battens down the hatches and sets off on an underwater voyage to the otherworldly realm of Avalon, home to Excalibur. Along the way, they must battle a banshee assassin, sea monsters, and a witch who seeks revenge on Alistair Grim for stealing her magical objects.

But that's not all. Unbeknownst to Grubb and the others, their fate has been written in an ancient Avalonian prophecy-a prophecy that holds the key to a destiny not even Alistair Grim could have imagined.

Gregory Funaro grew up in Cranston, Rhode Island, and wrote his first story, "The Ghost in the Window,"in the fourth grade. He considers this to be his finest work, but unfortunately it has been lost to time. Following high school, Greg majored in theatre at the University of New Hampshire and, after various acting gigs, received his AM in theatre arts from Brown University and an MFA in acting from the FSU/Asolo Conservatory. Greg teaches drama at East Carolina University and is busy working on the next book in the Odditorium series.