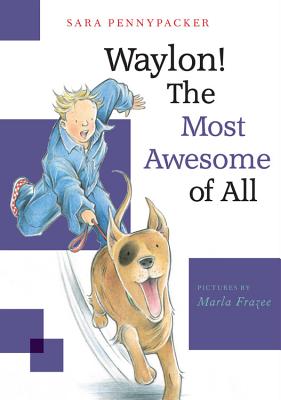 Waylon! The Most Awesome of All

Waylon can't wait to participate in the Boston Science Expo on June 14. He's confident that his project will impress the crowd, and his idol, a famous astrophysicist, is sure to be in attendance. Maybe Waylon will finally get a chance to meet her! The Expo is on the same day of his sister's performance at the Beantown Repertory Theater. Neon has been preparing for weeks, ever since she won third prize in a New Voices in Boston Theater contest, and their dad has agreed to be the centerpiece of the show. June 14 is also the deadline Waylon's dad set for himself to sell his screenplay to Hollywood. Finally, Waylon's mom has a mysterious appointment that day that she won't talk about. It looks as though Waylon will be going to the Science Expo by himself. But at least there's that astrophysicist!

When Waylon's dad is summoned to Hollywood at the last minute, Neon is in dire need of a replacement. She trains her eyes on Waylon, and he has no choice but to be the stand-in, even though it means missing the Expo. It promises to be the most embarrassing night of his life . . . yet it could turn out to be the most awesome of all.

But what is Mom up to, anyway?

Sara Pennypacker splits her time between Florida and Massachusetts, were she feels lucky to be able to write every day. She is the author of many children's books, including Waylon! One Awesome Thing and Waylon! Even More Awesome, the New York Times #1 bestseller Pax; seven in the New York Times bestselling Clementine series; two in the Stuart series; Meet the Dullards; Summer of the Gypsy Moths; and Sparrow Girl. Her books have won numerous accolades, including a Golden Kite Award, a Christopher Award, and several children's choice state awards, and they have appeared on many Best Books of the Year lists. For more information, visit www.sarapennypacker.com.
Marla Frazee illustrated all of the books in the Waylon and Clementine series. She was awarded a Caldecott Honor on two occasions: for All the World by Liz Garton Scanlon, and her own A Couple of Boys Have the Best Week Ever. She is also the author-illustrator of Roller Coaster, Walk On!, Santa Claus the World's Number One Toy Expert, and The Boss Baby, which inspired a major motion picture. Marla has three grown sons, and works in a small backyard cabin under an avocado tree. Visit her at www.marlafrazee.com.