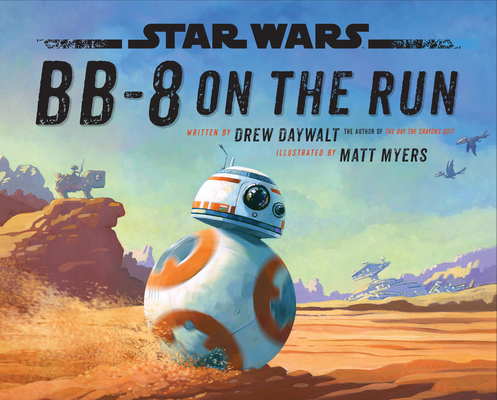 Star Wars BB-8 on the Run

When BB-8 is separated from his master, Poe Dameron, on the lonely desert planet of Jakku, he has no choice but to keep rolling. It's all up to him to get a top-secret map back to the Resistance so they can find Luke Skywalker and save the galaxy from the evil First Order.

It's scary to have a big job when you're just a little droid on your own. But BB-8 isn't alone for long. As he speeds across the sand, BB-8 meets all kinds of strangers who need his help. Should he do good things, as Poe always told him, or will that get in the way of his mission?

Drew Daywalt, a lifetime Star Wars fan, was thrilled to write this new story. He is a former Hollywood filmmaker turned picture book author. He is best known for his New York Times best-selling The Day the Crayons Quit and The Day the Crayons Came Home, both illustrated by Oliver Jeffers. His most recent picture book, The Legend of Rock Paper Scissors, illustrated by Adam Rex, also hit the New York Times list. Drew has a picture book coming from Disney-Hyperion in Fall 2018. He lives in Los Angeles, California with his wife and two children.

For Matt Myers, it was a dream come true to work on a Star Wars book with Drew Daywalt. Matt has illustrated several picture books using his technique of painting combined with digital finishing. He created the art for Battle Bunny by Jon Scieszka and Mac Barnett, a New York Times bestseller. He also illustrated The Infamous Ratsos, a Theodor S. Geisel Honor Book. He lives in North Carolina.