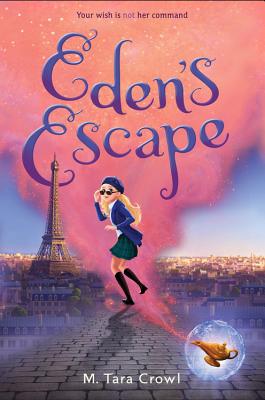 Eden's greatest wish has finally come true. No longer confined to her lamp, she begins a spectacular life in Manhattan with her new guardian, Pepper, a bubbly genie alum who's also a Broadway actress. Eden only gets a taste of the city's wonders before she's whisked away for a wish granting--she is still a genie with a job, after all.
David Brightly isn't like other wishers Eden has met. The owner of the world's leading tech company seems more interested in tapping into the lamp's power than making his first wish. Trapped in Brightly's laboratory and unable to get to the lamp, Eden has no choice but to escape and go on the run.
She finds herself on the streets of Paris, nowhere near out of danger. Brightly has half the city searching for Eden, claiming she is his kidnapped daughter. She manages to don a disguise and get word of her predicament out to the loyal genies on earth. But Paris is also headquarters of Electra, a group of former genies bent on revenge against Eden, and it seems the scheming Sylvana has teamed up with Brightly to seize the lamp's power once and for all.
Eden embarks on a dangerous mission to retrieve the lamp and protect the centuries-old genie legacy. But Brightly has more tricks up his sleeve than any mortal Eden has met. Soon, every genie will have to pick a side in an epic showdown against the greatest threat the lamp has ever faced.

Praise For Eden's Escape (Eden of the Lamp, Book 2)…

"An imaginative romp with a smart, snarky protagonist and a humorous interpretation of the world as we know it...[Eden] is also just plain entertaining, with a sassy attitude and a clever wit that saves her on more than one occasion."
—BCCB

"Middle grade readers will enjoy the children's autonomy and Eden's humorous difficulties in grasping how school works...Hand this to readers who like their magical fantasy combined with middle school drama."
—School Library Journal

M. Tara Crowl grew up in Murfreesboro, Tennessee. She studied Cinematic Arts at the University of Southern California, then received an MA in Creative Writing at Macquarie University in Sydney, Australia. She lives in New York City.
Loading...
or
Not Currently Available for Direct Purchase