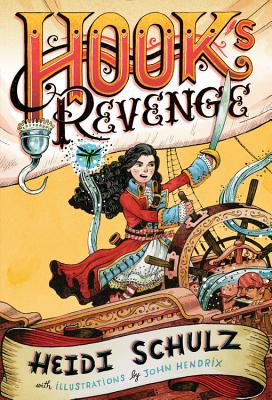 Twelve-year-old Jocelyn dreams of becoming every bit as daring as her infamous father, Captain James Hook. Her grandfather, on the other hand, intends to see her starched and pressed into a fine society lady. When she’s sent to Miss Eliza Crumb-Biddlecomb’s Finishing School for Young Ladies, Jocelyn’s hopes of following in her father’s fearsome footsteps are lost in a heap of dance lessons, white gloves, and way too much pink.

So when Jocelyn receives a letter from her father challenging her to avenge his untimely demise at the jaws of the Neverland crocodile, she doesn’t hesitate—here at last is the adventure she has been waiting for. But Jocelyn finds that being a pirate is a bit more difficult than she’d bargained for. As if attempting to defeat the Neverland’s most fearsome beast isn’t enough to deal with, she’s tasked with captaining a crew of woefully untrained pirates, outwitting cannibals wild for English cuisine, and rescuing her best friend from a certain pack of lost children, not to mention that pesky Peter Pan who keeps barging in uninvited.

The crocodile’s clock is always ticking in Heidi Schulz’s debut novel, a story told by an irascible narrator who is both dazzlingly witty and sharp as a sword. Will Jocelyn find the courage to beat the incessant monster before time runs out?

* "Whether a fan of J.M. Barrie's classic tale or new to Neverland, readers will be clamoring for more from this enchanting world."—School Library Journal, starred review

* "Readers will delight both the story and the storytelling."—Bulletin of the Center for Children's Books, starred review

"Featuring a lively, colorful cast, and a droll narration with snarky asides by an anonymous, self-proclaimed pirate authority, this entertaining take on the Peter Pan story neatly blends action-adventure and comical and heartfelt moments."—Booklist

Heidi Schulz is a New York Times Bestselling author and self-proclaimed giraffe suspicioner who lies to children for fun and profit. She is best known for her award winning and bestselling novel for middle grade readers, Hook’s Revenge, published by Little Brown Books, and her picture book Giraffes Ruin Everything, published by Bloomsbury Kids. When she is not writing, Heidi can be found living with her family in their Salem, Oregon home, attempting to corral her two unwieldy dogs, sewing herself yet another fit-and-flare dress, or working through her bottomless stack of nightstand books.
John Hendrix loves to draw. In fact, he’s drawing right now in St. Louis, Missouri. He lives there with his wife and two children, and teaches at Washington University. His drawings have been featured in numerous publications, and he is the illustrator of many acclaimed children’s books. Visit John online at johnhendrix.com and follow him on Twitter at @hendrixart.
Loading...
or
Not Currently Available for Direct Purchase