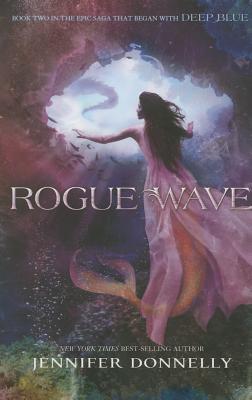 From award-winning author, Jennifer Donnelly.
Serafina, Neela, Ling, Ava, Becca, and Astrid, six mermaids from realms scattered throughout the seas and freshwaters, were summoned by the leader of the river witches to learn an incredible truth: the mermaids are direct descendants of the Six Who Ruled—powerful mages who once governed the lost empire of Atlantis. The ancient evil that destroyed Atlantis is stirring again, and only the mermaids can defeat it. To do so, they need to find magical talismans that belonged to the Six.
Serafina believes her talisman was buried with an old shipwreck. While researching its location, she is almost discovered by a death rider patrol led by someone familiar. . . . The pain of seeing him turned traitor is devastating.

"A fantastic addition to the genre of mermaids, this book will also appeal to readers of action and those who appreciate usurped leaders taking back their kingdom. It starts with a common enough concept: a royal girl who is worried about her betrothal and about love. Donnelly then adds layers of complexity to the tale and weaves her story into that of Atlantis. Friendship, trust, and responsibility are major themes as Sera struggles to grasp that she is really her kingdom’s only hope. Quick-witted, loveable characters and a well-planned fantasy world make this an all-encompassing book. Readers will eagerly await future volumes and the answers they will provide."—<EM>VOYA</EM>

"A richly imagined novel. Themes of conquering fear and believing in oneself are woven throughout, along with an acknowledgment of humans’ environmental impact on the sea and its inhabitants. Despite the high stakes and a few frightening moments, the story is never overserious; it’s just right for readers who have grown up with, but aged out of, The Little Mermaid and the Disney Fairies franchise." —<I>Publishers Weekly</I>

Jennifer Donnelly is an award-winning author of both adult and young adult books, including Deep Blue and Rogue Wave, the first two books in the Waterfire Saga. For adults she has written a trilogy of best-selling books that includes The Tea Rose, The Winter Rose, and The Wild Rose. Her first young adult novel, A Northern Light, received many accolades, among them the Los Angeles Times Book Prize, a Carnegie Medal in the UK, and a Michael L. Printz Honor. Her second young adult novel, Revolution, was named a Best Book of 2010 by Kirkus Reviews and School Library Journal, and the audiobook received a 2011 American Library Association Odyssey Honor. She lives in New York’s Hudson Valley. For more information, visit www.jenniferdonnelly.com.
Loading...
or
Not Currently Available for Direct Purchase