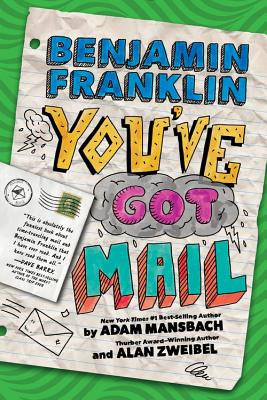 If the Future has any remedy for this situation, do not hesitate to provide it. That is to say, Ike and Claire Wanzandae, HELP! HELP HELP HELP.

I am (perhaps not for long),
Benjamin Franklin

Ike Saturday has seen better days. For one thing, his pen pal, Benjamin Franklin (yes, that Benjamin Franklin), is the target of an angry mob after Ike's plan to help the Founding Fathers with some intel from the future seriously backfired. For another, he's decided to mail himself back in time with the help of his girlfriend, Claire Wanzandae, and it's not a particularly comfortable way to travel.

Once Ike tracks B-Freezy down in 1776, it becomes clear that his pal is less than impressed with the irritating, modern-day rescuer, partially because Ike has a habit of making things worse for Ben, and partially because Ben is incredibly cranky when not in the presence of numerous meat pies. Which speaks to another issue for the pair: they have no money, no food, and basically no plan for saving the country. But Claire won't be able to cover for Ike back home in the future forever, and the British are looking pretty impatient, so Ike and B-Freezy will have to come up with something quickly if they want to avoid an epic, history-destroying disaster.

In this hilarious sequel to Benjamin Franklin: Huge Pain in My . . . , Adam Mansbach and Alan Zweibel take Ike and B-Freezy's antics to the next level as this ill-paired (and sometimes actually ill) duo hold the future of the world in their not-so-capable hands.

Praise for Benjamin Franklin: Huge Pain in my...
"Famously funny, this book flies like Ben Franklin's kite, but into a nuclear reactor. Forget the lightning; kids' stuff!"—Ridley Pearson, New York Times best-selling author of The Kingdom Keepers series and Peter and the Starcatchers

"This is absolutely the funniest book about time-traveling mail and Benjamin Franklin that I have ever read. And I have read them all."—Dave Barry, New York Times Best-Selling author of The Worst Class Trip Ever

An original Saturday Night Live writer, Alan Zweibel has won multiple Emmy and Writers Guild of America Awards for his work in television, which also includes It's Garry Shandling's Show, Late Show With David Letterman, and Curb Your Enthusiasm. In the theater he collaborated with Billy Crystal on the Tony Award-winning play 700 Sundays, wrote the off-Broadway play Bunny Bunny: Gilda Radner: A Sort of Romantic Comedy which he adapted from his book, and his novel The Other Shulman won the 2006 Thurber Prize for American Humor.

Adam Mansbach is the author if the instant New York Times bestsellers Go the **** to Sleep and You Have to ******* Eat, as well as the novels Rage is Back, The Dead Run, Angry Black White Boy, and The End of the Jews, winner of the California Book Award. His work has appeared in the New Yorker, New York Times Book Review, Esquire, the Believer, and on National Public Radio's All Things Considered.

Together, Adam and Alan are also the authors of the first book in this series, Benjamin Franklin: Huge Pain in My . . .
Loading...
or
Not Currently Available for Direct Purchase