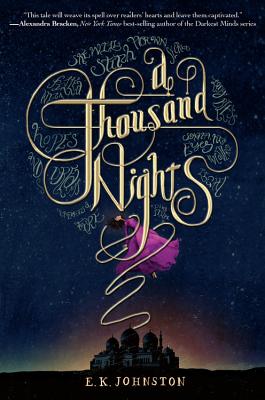 "A story threaded with shimmering vibrance and beauty, A Thousand Nights will weave its spell over readers' hearts and leave them captivated long after the final tale has been told." -- Alexandra Bracken, New York Times best-selling author of The Darkest Minds series

A dazzling retelling of Arabian Nights, A THOUSAND NIGHTS is a tale of family, love and power that would not feel out of place if Scheherazade herself were telling it. And maybe she is...

Lo-Melkhiin killed three hundred girls before he came to her village, looking for a wife. When she sees the dust cloud on the horizon, she knows he has arrived. She knows he will want the loveliest girl: her sister. She vows she will not let her be next. And so she is taken in her sister's place. Night after night, Lo-Melkhiin comes to her and listens to the stories she tells, and day after day she is awoken by the sunrise. Exploring the palace, she begins to unlock years of fear that have tormented and silenced a kingdom. Lo-Melkhiin was not always a cruel ruler. Something went wrong.

Far away, back in their village, her sister is mourning. Through her pain, she calls upon the desert winds, conjuring a subtle unseen magic, and something besides death stirs the air. Then at the palace, the words she speaks to Lo-Melkhiin every night are given a strange life of their own. Little things, at first: a dress from home, a vision of her sister. With each tale she spins, her power grows. Soon she dreams of bigger, more terrible magic: power enough to save a king, if she can put an end to the rule of a monster.


Praise For A Thousand Nights…

"This fantasy, rich with layers of legend and meaning, will captivate readers ready for an adventure. . . Johnston's writing is densely lyrical, evoking the legendary tales of One Thousand and One Nights, from which this story derives."—Booklist

E.K. Johnston had several jobs and one vocation before she became a published writer. If she's learned anything, it's that things turn out weird sometimes, and there's not a lot you can do about it. Well, that and how to muscle through awkward fanfic because it's about a pairing she likes.

You can follow Kate on Twitter (@ek_johnston) to learn more about Alderaanian political theory than you really need to know, on Tumblr (ekjohnston) if you're just here for the pretty pictures, or online at ekjohnston.ca.
Loading...
or support indie stores by buying on