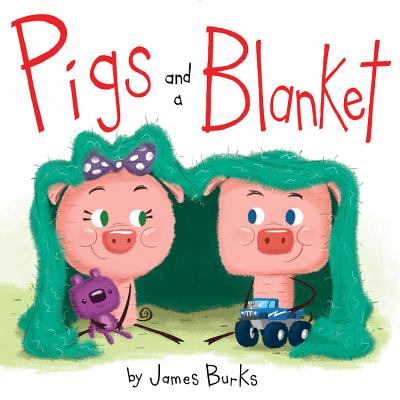 Pigs and a Blanket

Pig siblings Henry and Henrietta love their green blanket. It is soft, it smells good, and it makes a great cape! As much as they each love playing with the blanket, they don't love sharing it. Will ripping it in two solve all their problems? Author/illustrator James Burks has created a funny, relatable, sweet story about two pigs who, despite their individual interests pulling them in different directions, really prefer to remain side by side.

James Burks (jamesburks.com) has written and illustrated a number of children's books, including another picture book about Henry and Henrietta, Pigs and a Blanket; the Bird & Squirrel graphic novel series; and Gabby & Gator, which was selected as a Read Across America title. Before beginning his career in books, James worked on such animated films as Space Jam, The Iron Giant, The Emperor's New Groove, Treasure Planet, and Home on the Range. He has also worked as a storyboard artist for such television shows as Wow! Wow! Wubbzy! and Fanboy & Chum Chum.
Loading...
or support indie stores by buying on
(This book is on backorder)