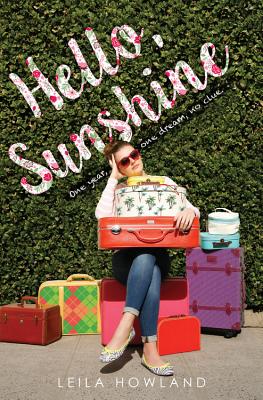 A Prep School Girl with a Hollywood Dream

Becca Harrington is a reject. After being rebuffed by every college on her list, she needs a fresh start, so she packs up everything and moves to LA, giving herself one year to land an acting gig or kill herself trying.

Unfortunately, not everything turns out as planned, and after a few grueling months, LA is looking like the worst idea ever. As hard as she tries, Becca can't land an agent, she's running out of cash, and her mom is hounding her to apply to more schools. In an act of desperation, Becca and her friend Marisol start posting short videos online-with the help of their adorable filmmaker neighbor, Raj-and the videos catch the attention of a TV producer. Could this be it? Her big break? Or will she have to move back home with nothing but some bad head shots and a monstrous credit-card bill?

Becca may not get the Hollywood ending she was hoping for, but perhaps she'll learn there's more than one way to achieve her dream.

Readers will love every page of this funny, romantic, aspirational, and ultimately triumphant novel about a girl who just wants to make it on her own.

"Howland portrays a grounded version of Hollywood... while keeping the story fun, engaging, and splashed with romance and wish fulfillment."—Publishers Weekly

"Perfectly captures the feeling of fledgling independence, with nothing but wits, hopes, and a few hundred dollars in the bank... An honest, grounded depiction of a young person's first steps into the real world. An engaging take on the pursuit of creative fulfillment."—Kirkus

"In this quirky tale of independence and triumph, a heroine takes a journey of self-discovery... Give this to romance readers and anyone who seeks adventure in the great wide somewhere."—School Library Journal

"This book is a fun chic-lit read for the reality-obsessed, star-driven reader."—School Library Connection

"[Howland] evokes the Nantucket setting vividly . . . when it comes to indulgent beach reading, sometimes it's more fun to get pushed over by a wave than to stay safely on your towel."—The New York Times


*"Readers should feel empowered by Cricket's efforts to grow up into a strong, honest, and emotionally intelligent young woman, even as they are enchanted by the romantic and exclusive island setting. This is a natural beach read, but will easily win Howland year-round fans, too."
—Publishers Weekly, starred review

"In this novel about finding oneself and following your heart, Howland creates a character that readers will be cheering for from beginning to end."—VOYA

"[R]eaders . . . will find this story multidimensional and enjoyable."—School Library Journal

A graduate of Georgetown University, Leila Howland spent five years acting in New York in everything from an MTV public service announcement for safe sex to a John Guare play at Lincoln Center, and was a proud company member of the award-winning Flea Theater in Tribeca. Currently, she is a school librarian in Los Angeles, where she lives with her family.
Loading...
or
Not Currently Available for Direct Purchase