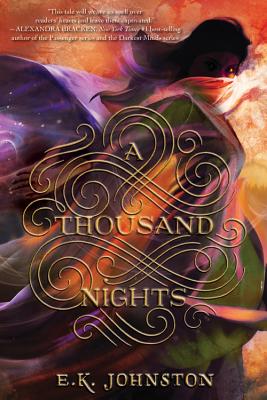 "A story threaded with shimmering vibrance and beauty, A Thousand Nights will weave its spell over readers' hearts and leave them captivated long after the final tale has been told." -Alexandra Bracken, New York Times best-selling author of The Darkest Minds series
Lo-Melkhiin killed three hundred girls before he came to her village, looking for a wife. When she sees the dust cloud on the horizon, she knows he has arrived. She knows he will want the loveliest girl: her sister. She vows she will not let her be next.

And so she is taken in her sister's place, and she believes death will soon follow. Lo-Melkhiin's court is a dangerous palace filled with pretty things: intricate statues with wretched eyes, exquisite threads to weave the most beautiful garments. She sees everything as if for the last time.But the first sun rises and sets, and she is not dead. Night after night, Lo-Melkhiin comes to her and listens to the stories she tells, and day after day she is awoken by the sunrise. Exploring the palace, she begins to unlock years of fear that have tormented and silenced a kingdom. Lo-Melkhiin was not always a cruel ruler. Something went wrong.

E. K. Johnston is a forensic archaeologist by training, a book seller and author by trade, and a grammarian by nature. She spends a great deal of time on the Internet because it is less expensive than going to Scotland. She can probably tell you, to the instant, when she fell in love with any particular song; but don't ask her, because then it will be stuck in both of your heads.

Praise For A Thousand Nights…

"This fantasy, rich with layers of legend and meaning, will captivate readers ready for an adventure. . . Johnston's writing is densely lyrical, evoking the legendary tales of One Thousand and One Nights, from which this story derives."—Booklist
or
Buy Here
Copyright © 2020 American Booksellers Association