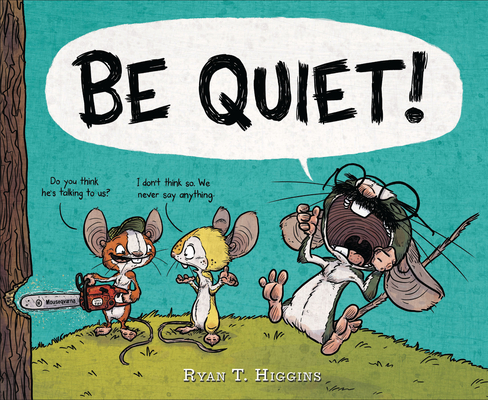 All Rupert the mouse wants is to star in a beautiful, wordless picturebook. One that’s visually stimulating! With scenic pictures! And style! He has plenty of ideas about what makes a great book, but his friends just WON’T. STOP. TALKING.Children and adults alike will chuckle at this comedic take on bookmaking from acclaimed author-illustrator Ryan T. Higgins.Praise for Mother BruceE. B. White Read-Aloud AwardEzra Jack Keats New Illustrator Honor* "[W]ry text and marvelously detailed pictures juxtapose uproariously. . .Visually beautiful, clever, edgy, and very funny."
—Kirkus, starred review

Praise For BE QUIET!…

* "Higgins has once again drawn up a winner."—<EM>Kirkus Reviews</EM>, starred review

* "This hilarious and fun read-aloud will be a hit at storytime."—<EM>School Library Journal</EM>, starred review

Ryan T. Higgins (ryanthiggins.com) is the author-illustrator of Mother Bruce, which received the E. B. White Read-Aloud Award and the Ezra Jack Keats New Illustrator Honor, and its sequel, Hotel Bruce. He lives in Southern Maine with his family and a menagerie of animals -- none of which are talking mice, but he does have a very chatty tortoise.
Loading...
or support indie stores by buying on