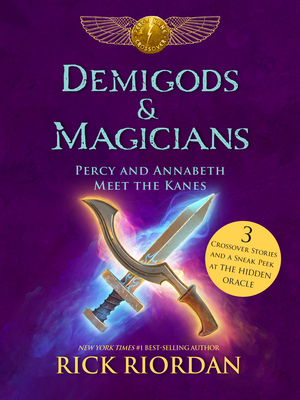 Percy and Annabeth Meet the Kanes

#1 NEW YORK TIMES BEST-SELLING AUTHOR
Sparks fly and monsters die when Greek demigods and Egyptian magicians team up to save New York.
Magic, monsters, and mayhem abound when Percy Jackson and Annabeth Chase meet Carter and Sadie Kane for the first time. Weird creatures are appearing in unexpected places, and the demigods and magicians have to team up to take them down. As they battle with Celestial Bronze and glowing hieroglyphs, the four heroes find that they have a lot in common--and more power than they ever thought possible.
But will their combined forces be enough to foil an ancient enemy who is mixing Greek and Egyptian incantations for an evil purpose?
Rick Riordan wields his usual storytelling magic in this adrenaline-fueled adventure.

Rick Riordan (www.rickriordan.com) is the author of three # 1 New York Times best-selling series with millions of copies sold throughout the world: Percy Jackson and the Olympians, the Kane Chronicles, and the Heroes of Olympus. His Greek myth collection, Percy Jackson’s Greek Gods, was a #1 New York Times bestseller as well. His previous novels for adults include the hugely popular Tres Navarre series, winner of the top three awards in the mystery genre. He lives in Boston, Massachusetts with his wife and two sons.
Loading...
or support indie stores by buying on