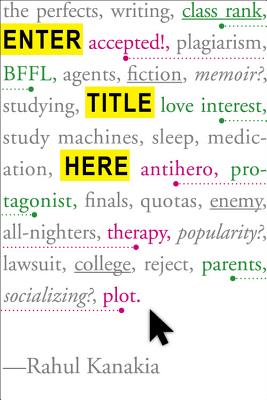 I'm your protagonist-Reshma Kapoor-and if you have the free time to read this book, then you're probably nothing like me.

Reshma is a college counselor's dream. She's the top-ranked senior at her ultra-competitive Silicon Valley high school, with a spotless academic record and a long roster of extracurriculars. But there are plenty of perfect students in the country, and if Reshma wants to get into Stanford, and into med school after that, she needs the hook to beat them all.

What's a habitual over-achiever to do? Land herself a literary agent, of course. Which is exactly what Reshma does after agent Linda Montrose spots an article she wrote for Huffington Post. Linda wants to represent Reshma, and, with her new agent's help scoring a book deal, Reshma knows she'll finally have the key to Stanford.

But she's convinced no one would want to read a novel about a study machine like her. To make herself a more relatable protagonist, she must start doing all the regular American girl stuff she normally ignores. For starters, she has to make a friend, then get a boyfriend. And she's already planned the perfect ending: after struggling for three hundred pages with her own perfectionism, Reshma will learn that meaningful relationships can be more important than success-a character arc librarians and critics alike will enjoy.

Of course, even with a mastermind like Reshma in charge, things can't always go as planned. And when the valedictorian spot begins to slip from her grasp, she'll have to decide just how far she'll go for that satisfying ending. (Note: It's pretty far.)

In this wholly unique, wickedly funny debut novel, Rahul Kanakia consciously uses the rules of storytelling-and then breaks them to pieces.

Rahul Kanakia's short stories have been published in Clarkesworld, F& SF, the Indiana Review, Lightspeed, and Nature. He holds an MFA in creative writing from Johns Hopkins, and a BA in economics from Stanford. Rahul lives with his wife in San Francisco, California. This is Rahul's debut novel. Visit him online at www.blotter-paper.com or on Twitter @rahkan.
Loading...
or
Not Currently Available for Direct Purchase