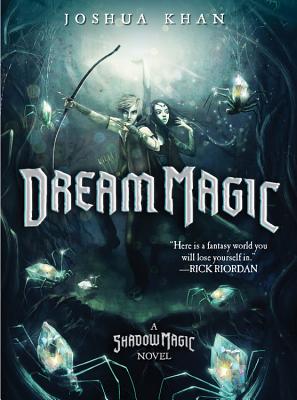 In Book 2 of a three book series, things are dire for the inhabitants of Castle Gloom and the surrounding villages. The undead are leaving their graves in droves, a troll army is on the march from the north, and people are mysteriously disappearing from their homes. The people of Gehenna are blaming their misfortunes on Lilith Shadow, their young queen. They believe she has cursed them by using magic, a practice forbidden to women. With her trusty executioner among the missing and her blackguard soldiers busy battling trolls, it is up to Lily and her friend Thorn to root out the real cause of all the trouble. Their search will uncover ugly truths and eventually lead to a nightmarish confrontation with nothing less than the rulership of the realm at stake. Zombies, ghosts, trolls, dream weavers, a black-hearted villain, and a giant hero bat are only some of the imaginative delights that await readers who relish a soaring adventure combined with a hair-raising mystery.

Joshua Khan was born in Britain, a land filled with ancient castles, dark forests, and tales of legendary heroes and fantastical monsters. He can tell you who King Arthur fought on Baden Hill, but can't tell you what he himself had for breakfast. So, his head stuffed with magical stories, it was inevitable that Joshua would want to create some of his own. Hence the Shadow Magic series. Josh lives in London with his family, but he'd rather live in a castle. It wouldn't have to be very big, just as long as it had battlements. Follow him on Twitter: @WriterJoshKhan


"There are plenty of exciting elements (zombies, ghosts, specters), and readers will appreciate Lily's determination to be more than just a princess who needs protection."
—Booklist


" . . . the action stays firmly on Thorn and Lily, keeping the exposition to a minimum and the heart-wrenching tension high. The core premise of a kingdom that embraces dark and death with open hearts, while still loving life and (at least in this generation) not being evil at all is a grabber. The addition of Thorn, a rural kid whose family has always struggled to make ends meet, is a smart one, as it pairs two kinds of intelligence, scrappy and privileged, to solve formidable obstacles and gives readers two engaging protagonists to root for."
—Bulletin of the Center for Children's Books
or
Not Currently Available for Direct Purchase
Copyright © 2020 American Booksellers Association