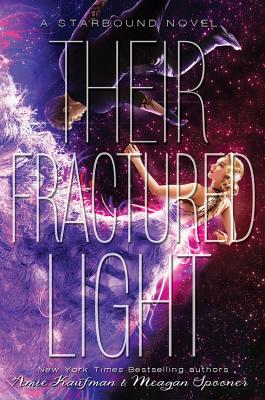 Their Fractured Light (The Starbound Trilogy #3)

A year ago, Flynn Cormac and Jubilee Chase made the now-infamous Avon Broadcast, calling on the galaxy to witness LaRoux Industries' corruption. A year before that, Tarver Merendsen and Lilac LaRoux were the only survivors of the Icarus shipwreck, forced to live a double life after their rescue.
Now, at the center of the galaxy on Corinth, all four are about to collide with two new players in the fight against LRI.
Gideon Marchant is an underworld hacker known as the Knave of Hearts, ready to climb and abseil his way past the best security measures on the planet to expose LRI's atrocities. Sofia Quinn, charming con artist, can work her way into any stronghold without missing a beat. When a foiled attempt to infiltrate LRI Headquarters forces them into a fragile alliance, it's impossible to know who's playing whom--and whether they can ever learn to trust each other.
With their lives, loves, and loyalties at stake, only by joining forces with the Icarus survivors and Avon's protectors do they stand a chance of taking down the most powerful corporation in the galaxy---before LRI's secrets destroy them all.
The New York Times best-selling Starbound trilogy comes to a close with this dazzling final installment about the power of courage and hope in humanity's darkest hour.

Praise For Their Fractured Light (The Starbound Trilogy #3)…

*"Lilac and Tarver are characters of depth, complexity, and strength, young people who alternatively elicit the reader's admiration, frustration, and sympathy... a testament to love, loyalty, courage, and the power of good over dystopian greed and perversity."—Booklist, starred review

"One of the most intense, thrilling, and achingly beautiful stories I've ever read."—Marie Lu, New York Times best-selling author of the Legend trilogy

"Kaufman and Spooner's debut collaboration is a stunning, gorgeously imagined romance with epic sweep, brimming with lush detail of setting and intricate character study. It's the kind of read to savor, but the survivalist plotting still rushes the reader to keep turning pages."—Ingram Library Group


"The authors' world building, their ability to combine unique and familiar themes, their talent for sustaining dual voices in the midst of romance and tension create a companion series that promises another world, another adventure, and, if we're lucky, another set of lovers, this time on Corinth."
—Booklist


"Kaufman and Spooner prove that their first brilliant installment was no fluke with this strong second outing. They provide complex characters and a situation with no simple solution. There is action, a spark of romance, and a mystery, all set on a fully-realized planet. This should have broad appeal among teen and adult science fiction readers."
—School Library Journal


"Kaufman and Spooner propose two well-developed protagonists and a well-rounded cast of supporting characters... Fans of the first book, as well as those who like impossible romance between two people on opposing sides, will enjoy this sequel."
—VOYA

Amie Kaufman and Meagan Spooner are longtime friends and sometime flatmates who have traveled the world (but not yet the galaxy), covering every continent between them. They are sure outer space is only a matter of time. Meagan, who is also the author of the Skylark trilogy, currently lives in Asheville, North Carolina. Amie, who is the coauthor of the Illuminae Files, lives in Melbourne, Australia. Although they currently live apart, they are united by their love of space opera, road trips, and second breakfasts. You can find them on Twitter @AmieKaufman and @MeaganSpooner.
Loading...
or support indie stores by buying on