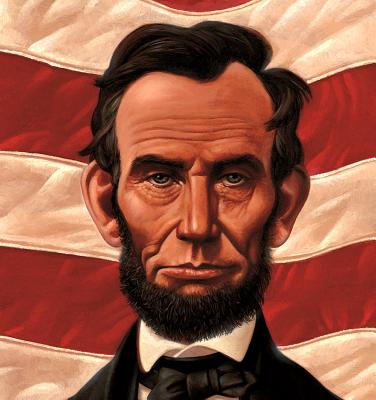 The Life of Abraham Lincoln (A Big Words Book #5)

Told in Doreen Rappaport's accessible, absorbing prose, and brought to life in powerful illustrations by Kadir Nelson, Abe's Honest Words is an epic portrait of a truly great American president.

From the time he was a young boy roaming the forests of the unsettled Midwest, Abraham Lincoln knew in his heart that slavery was deeply wrong. A voracious reader, Lincoln spent every spare moment of his days filling his mind with knowledge, from history to literature to mathematics, preparing himself to one day lead the country he loved towards greater equality and prosperity. Despite the obstacles he faced as a self-educated man from the back woods, Lincoln persevered in his political career, and his compassion and honesty gradually earned him the trust of many Americans. As president, he guided the nation through a long and bitter civil war and penned the document that would lead to the end of slavery in the United States.

The passion for humanity that defined Lincoln's life shines through in this momentous follow-up to Martin's Big Words and John's Secret Dreams.

“This collaboration between Rappaport and Nelson provides a sweeping arc of Lincoln’s life, jumping from his humble beginnings and his early political career through his struggles to preserve the union and to help abolish slavery. Rappaport writes in a very free verse, and on each page echoes her narrative with prescient samplings of Lincoln’s words... This exceptional art, along with Rappaport’s and Lincoln’s words, makes this a fine celebration of a man who needs little introduction”—Booklist

“With language as lean as our sixteenth president, Rappaport brings to light the major influences on and turning points in Lincoln’s life…Some of Nelson’s handsome portraits glow with background light and luminous skin tones, evoking the remote majesty of the statue at the Lincoln Memorial. At other times, he lets Lincoln walk down those stairs and portrays an unassuming man reading under a tree or cajoling political leaders with a story or two.”—The Horn Book

Kadir Nelson is the illustrator of many books for children, including Moses: When Harriet Tubman Led Her People to Freedom by Carole Boston Weatherford, an NAACP Image Award winner, a Caldecott Honor Book, and a Coretta Scott King Illustrator Award winner; Ellington Was Not a Street by Ntozake Shange, a Coretta Scott King Illustrator Award winner; Please, Baby, Please and Please, Puppy, Please, by Spike Lee and Tonya Lewis Lee; and Will Smith's Just the Two of Us, also an NAACP Image Award winner. He is also the author/illustrator of We Are the Ship: The Story of Negro League Baseball.
Loading...
or
Not Currently Available for Direct Purchase