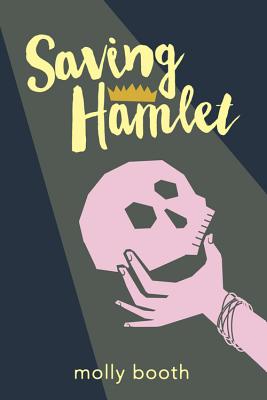 Emma Allen couldn't be more excited to start her sophomore year. Not only is she the assistant stage manager for the drama club's production of Hamlet, but her crush Brandon is directing, and she's rocking a new haircut that's sure to get his attention. But soon after school starts, everything goes haywire: Emma's promoted to stage manager with zero experience, her best friend Lulu stops talking to her, and Josh—the adorable soccer boy who's cast as the lead—turns out to be a disaster.

One night after rehearsal, Emma distractedly falls through the stage's trap door...landing in the basement of the Globe Theater. It's London, 1601, and with her awesome new pixie cut, everyone thinks Emma's a boy—even Will Shakespeare himself. With no clue how to get home, Emma gamely plays her role as backstage assistant to the original production of Hamlet, learning a thing or two about the theater, and meeting an incredibly hot actor named Alex who finds Emma as intriguing as she finds him. But once Emma starts traveling back and forth through time, things get really confusing. Which boy is the one for her? In which reality does she belong? Will Lulu ever forgive her? And can she possibly save two disastrous productions of Hamlet before time runs out?

"I love, love, love Saving Hamlet. I love its characters -- smart, sassy, irreverent -- and its gender-bending both in the 21st and 17th centuries. I love its intelligent take on high school theater geeks."
—Jane Yolen, author of The Devil's Arithmetic, Sword of the Rightful King, and Owl Moon

* "Fans of the Bard will relish this evocative and witty time-travel tale.... As enlightening as it is enjoyable, this whimsical novel deserves applause of its own."—Publishers Weekly, starred review

* "This entertaining and original novel deals not just with growing up, but
with a fresh and different interpretation of 'to be or not to be.'"—Kirkus Reviews, starred review

"Emma is an easy-to-root-for heroine whose struggles will resonate with
teens, drama geeks or otherwise.... A fun, imaginative debut."—Booklist

"The well-paced narrative should have wide appeal for teen thespians."—School Library Journal

Molly Booth is the author of Saving Hamlet and Nothing Happened, and a total Shakespeare nerd. In high school, she was a stage manager for three different community theatres, which almost killed her. She graduated from Marlboro College and went on to study more Shakespeare (twist!) at University of Massachusetts Boston. Molly is a freelance writer and editor and has been published on TheMarySue.com, McSweeneys.net, HelloGiggles.com, and various other websites. She cohosts a Bard-centric podcast, Party Bard, and directs a lovely, hilarious, and fierce group of homeschooled teen Shakespearean actors. Molly lives in Massachusetts, where she spends a lot of time with family and friends, and the rest attending to her queenly cat and loaf-of-bread-shaped dog. You can visit her online (please do!) at mollybooth.com.
Loading...
or
Not Currently Available for Direct Purchase