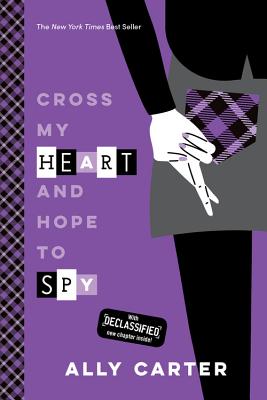 After the excitement of the fall, all Cammie Morgan wants is peaceful semester at school. But that's easier said than done when you're a CIA legacy and go to the premier school in the world...for spies. Cammie may have a genius I.Q., but there are still a lot of things she doesn't know. Like, how much trouble is she really in after what happened last semester? What will happen with Josh? And above all, why is her mother acting so strangely?
Despite Cammie's best intentions to be a normal student, danger seems to follow her. She and her friends learn that their school is going to play host to some mysterious guests-code name: Blackthorne. Then she's blamed for a security breach that leaves the school's top secret status at risk. Soon, Cammie and her friends are crawling through walls and surveilling the school to learn the truth about Blackthorne and clear Cammie's name. Even though they have confidence in their spy skills, this time the targets are tougher (and hotter), and the stakes for Cammie's heart-and her beloved school-are higher than ever.

PRAISE FOR I'D TELL YOU I LOVE YOU, BUT I'D HAVE TO KILL YOU

Ally Carter (www.allycarter.com) is the New York Times best-selling author of the six books in the Gallagher Girls series: I'd Tell You I Love You, But Then I'd Have to Kill YouCross My Heart and Hope to SpyDon't Judge a Girl by her CoverOnly the Good Spy YoungOut of Sight, Out of Time and United We Spy as well as Heist Society, Uncommon Criminals, and Perfect Scoundrels. Ally lives in Oklahoma where she is hard at work on her next novel.
Loading...
or support indie stores by buying on
(This book is on backorder)