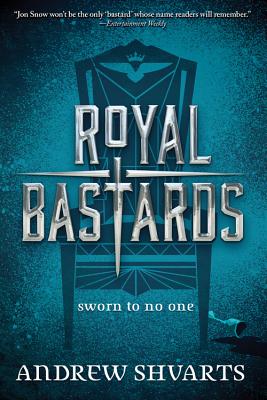 "Jon Snow won't be the only 'bastard' whose name readers will remember." --Entertainment Weekly
Being a bastard blows. Tilla would know. Her father, Lord Kent of the Western Province, loved her as a child, but cast her aside as soon as he had trueborn children. At sixteen, Tilla spends her days exploring long-forgotten tunnels beneath the castle with her stablehand half-brother, Jax, and her nights drinking with the servants, passing out on Jax's floor while her castle bedroom collects dust. Tilla secretly longs to sit by her father's side, enjoying feasts with the rest of the family. Instead, she sits with the other bastards, like Miles of House Hampstedt, an awkward scholar who's been in love with Tilla since they were children.
Then, at a feast honoring the visiting princess Lyriana, the royal shocks everyone by choosing to sit at the Bastards' Table. Before she knows it, Tilla is leading the sheltered princess on a late-night escapade. Along with Jax, Miles, and fellow bastard Zell, a Zitochi warrior from the north, they stumble upon a crime they were never meant to witness.
The bastards band together, realizing they alone have the power to prevent a civil war that will tear their kingdom apart -- if they can warn the king in time. And if they can survive the journey . . .

Andrew Shvarts is an author of novels and video games. He has a BA in English Literature and Russian from Vassar College. He works for Pixelberry Studios as a designer, making mobile games like Choices, High School Story, and more. Andrew lives in San Jose, California, with his wife, son, and two kittens. Find him on Twitter @Shvartacus.

"Shvarts creates a diverse world with distinct geography and subcultures for this series opener Adventure-loving fantasy readers will eat it up."—Kirkus Reviews

"Jon Snow won't be the only 'bastard' whose name readers will remember."
—Entertainment Weekly

"We cannot wait for this high-stakes, edge of your seat fantasy."
—Bustle

"Engrossing. The characters are well drawn, and the action moves quickly and with plenty of twists and turns."
—Huffington Post
or support indie stores by buying on
Copyright © 2020 American Booksellers Association