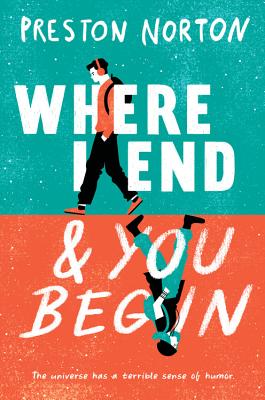 Where I End and You Begin

Two sworn enemies suddenly switch bodies in this witty and heartfelt novel of romantic relationships, gender identity, and the joy of being yourself.

Ezra Slevin is an anxious, neurotic insomniac who spends his nights questioning his place in the universe and his days obsessing over Imogen, a nerdy girl with gigantic eyebrows and a heart of gold. For weeks, Ezra has been working up the courage to invite Imogen to prom. The only problem is Imogen's protective best friend, Wynonna Jones. Wynonna has blue hair, jams to '80s rock, and has made a career out of tormenting Ezra for as long as he can remember.

Then, on the night of a total solar eclipse, something strange happens to Ezra and Wynonna, and they wake up in each other's bodies. Not only that, they begin randomly swapping back and forth every day! Ezra soon discovers Wynonna's huge crush on his best friend, Holden, a five-foot-nothing girl magnet with anger management problems. With no end to their curse in sight, Ezra makes Wynonna a proposition: While swapping bodies, he will help her win Holden's heart, but only if she helps him woo Imogen.

Forming an uneasy alliance, Ezra and Wynonna embark on a collision course of mistaken identity, hurt feaelings, embarrassing bodily functions, and a positively byzantine production of Twelfth Night. Ezra wishes he could be more like Wynonna's badass version of Ezra -- but he also realizes he feels more like himself while being Wynonna than he has in a long time.

Wildly entertaining and deeply heartfelt, Where I End and You Begin is a brilliant, unapologetic exploration of what it means to be your best self.

Praise For Where I End and You Begin…

"Ezra's narrational voice is well-crafted and witty, and the characters are layered and complex... The book deftly explores the fluidity of gender and sexuality without moralizing or oversimplifying... An entertaining queer romance."—Kirkus Reviews

"Norton's novel offers thought-provoking ideas about gender, sexuality, and compassion with plenty of comedy along the way."—Publishers Weekly

"An intricate and gorgeously plotted novel that blurs the lines between gender and sexuality, and absolutely oozes with empathy and compassion."—Booklist

Accolades
BookRiot: 150 YA Books Hitting Shelves in April, May, and June 2019: Spring 2019 YA Book Preview, selection

PRAISE FOR NEANDERTHAL OPENS THE DOOR TO THE UNIVERSE

Preston Norton is bisexual, slightly genderqueer, and married. His partner, Erin, is trying to put him on a diet, and he's revolting (both contexts apply). He has taught seventh grade and ninth grade English, mentored drug addicts, and mowed lawns (in no particular order). He is obsessed with 2001: A Space Odyssey and Quentin Tarantino.
Loading...
or support indie stores by buying on