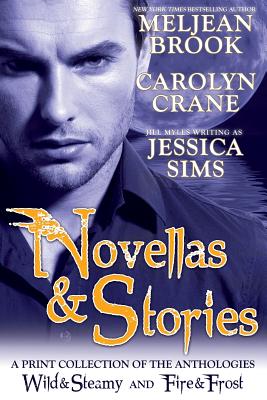 For the first time in print, six wild and steamy tales from three of today's hottest paranormal and steampunk romance authors.

The Blushing Bounder by Meljean Brook - While the search for a killer puts Constable Newberry's life in danger, he faces a danger of another kind: to his heart, by the woman forced to marry him. What will it take for this prudish bounder to convince his wife to stay?

Vixen by Jessica Sims - Miko's denied her were-fox nature for far too long and turned her back on her vixen heritage. But when she meets two very sexy cat-shifters, she has to decide if she truly wants to give up on her frisky side, or embrace it. Because the were-fox in her doesn't want to choose between both men...it wants them both.

Kitten-Tiger & the Monk by Carolyn Crane - Sophia Sidway, Midcity's most dangerous memory revisionist, seeks out the mysterious Monk in the wasteland beneath the Tangle turnpike, hoping for redemption...but it turns out that the Monk is not all that pious, and the turnpike is no turnpike at all.

These lovers create their own heat, even when surrounded by ice...

Speed Mating by Jessica Sims - Estrella may be going into heat, but she's determined to remain in control. Just because she's ovulating doesn't mean she has to settle for just any man (or his beast). Her sexy alpha's determined to find her a tiger to take care of her heat and father her child...but no one seems to look quite as good as the man in charge. Will giving in to her need for her alpha ruin her tenuous relationship with her clan or be a match made in heaven?

Conjuring Max by Carolyn Crane - The witches of the world ridiculed nerdy Veronica for trying to use newfangled computers to enhance old world spellcasting. Well, it's 1984 now, and she's perfected her spellcasting computer program. Hey, who needs friends when you can conjure virtually anything...or anybody? So when Veronica makes powerful new enemies, she conjures Max, a pitbull of a cop, to deal with the pesky hitmen who keep coming around. But tough-guy Max is in no mood to play lapdog to a gorgeous witch.

Wrecked by Meljean Brook - Elizabeth has spent the past five years running from her father; her father's huntsman, Caius, has spent the past five years pursuing her. But when he finally catches up to her on an airship flying above Europe's zombie-infested cities, Elizabeth discovers that Caius isn't the only danger she has to fear-and now that he's found her, Caius doesn't intend to let her go.

Meljean Brook is the New York Times bestselling author of the Iron Seas steampunk romance series and the Guardians paranormal romance series. The Iron Duke was one of Publishers Weekly's Best Romances of 2010. Heart of Steel was named one of Amazon's Best Books of 2011. Riveted claimed RT BookReviews' Editors' Choice for Best Novel of the Year in 2012. Meljean lives in Oregon, consumes too much caffeine, and can't spell occassionally. www.meljeanbrook.com Carolyn Crane is the author of the Code of Shadows series, a paranormal romantic suspense spy series with a dash of science-fiction and fantasy. She is also the author of the popular urban fantasy series, The Disillusionists, and a new romantic suspense series, The Associates. She's a writer living in Minneapolis with her husband and two daring cats. She works a day job as a freelance advertising writer; she's also waited tables at a surprising number of Minneapolis restaurants and bars (though not as many as her writer husband has). She's been a shop clerk and a plastics factory worker, which she was dismal at (think I Love Lucy). Also, if you invite her to your party, your cheese plate will be in grave danger. During rare moments when she's not at her computer, Carolyn can be found reading in bed, running, helping animals, or eating Mexican food. www.authorcarolyncrane.com Jessica Sims lives in Texas. She has some cats, but what writer doesn't? She plays video games and confesses to reading comic books. And she likes writing, but that one was pretty obvious. Jessica also writes paranormal romance as Jill Myles and hot contemporary romance as USA Today bestselling author Jessica Clare. www.jessica-sims.com
Loading...
or support indie stores by buying on