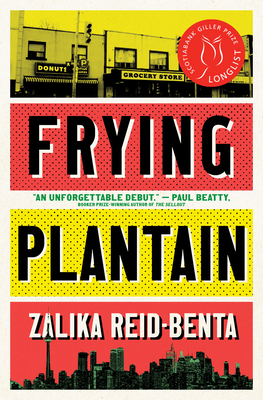 Set in a neighbourhood known as "Little Jamaica," Frying Plantain follows one young girl from elementary school to high school graduation as she navigates the tensions between mothers and daughters, second-generation immigrants and first-generation cultural expectations, and Black identity and predominantly white society.

Kara Davis is a girl caught in the middle -- of her North American identity and her desire to be a "true" Jamaican, of her mother and grandmother's rages and life lessons, of having to avoid being thought of as too "faas" or too "quiet" or too "bold" or too "soft." Set in a neighbourhood known as "Little Jamaica," Kara moves from girlhood to the threshold of adulthood, from elementary school to high school graduation, in these twelve interconnected stories. We see her on a visit to Jamaica, startled by the sight of a severed pig's head in her great-aunt's freezer; in junior high, the victim of a devastating prank by her closest friends; and as a teenager in and out of her grandmother's house, trying to cope with the ongoing battles between her unyielding grandparents.

A rich and unforgettable portrait of growing up between worlds, Frying Plantain shows how, in one charged moment, friendship and love can turn to enmity and hate, well-meaning protection can become control, and teasing play can turn to something much darker.