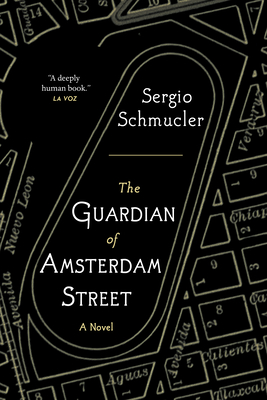 The Guardian of Amsterdam Street

Roma meets A Gentleman in Moscow in this vivid portrait of the twentieth century, witnessed by one boy from his self-imposed refuge in Mexico City.

Galo has not left his home on Amsterdam Street, not since the day in 1938 when a shocking act of violence split his family apart. His hermitage is made easier by the peculiar design of the street. It is shaped like an ellipse -- if you walk it, you will find yourself returning to the same place again and again.

Playing host to Jewish refugees, Spanish exiles, and Latin American revolutionaries, Amsterdam Street becomes the school at which Galo learns about a world he never sees, and the ideals and terrors that shape history. And from his chair in the garden of the home he will not leave, he begins to realize that Amsterdam Street, the site of endless returns, may be the true centre of the world. Appointing himself the street's guardian, Galo witnesses the decades pass, knowing that everyone who walks away must one day come back.

A novel of rare humanity and grace, The Guardian of Amsterdam Street is a stunning portrait of a neighbourhood where the whole of the twentieth century comes alive and a moving inquiry into how we shape the world, and how it transforms us in turn.