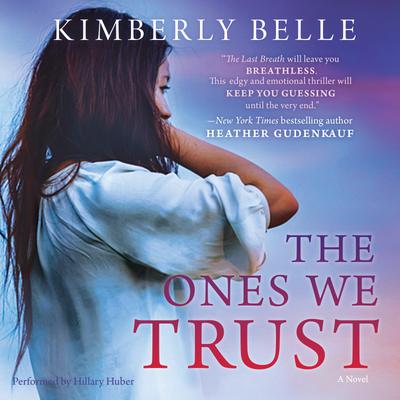 The Ones We Trust (Digital Audiobook)

When former DC journalist Abigail Wolff attempts to rehabilitate her career, she finds herself at the heart of a US army cover-up involving the death of a soldier in Afghanistan—with unspeakable emotional consequences for one family. As the story of what happened comes to light, Abigail will do anything to write it.

The more evidence she stumbles upon in the case, the fewer people it seems she can trust, including her own father, a retired army general. And she certainly never expected to fall in love with the slain soldier's brother, Gabe, a bitter man struggling to hold his family together. The investigation eventually leads her to an impossible choice, one of unrelenting sacrifice to protect those she loves.

Beyond the buried truths and betrayals, questions of family loyalty and redemption, Abigail's search is, most of all, a desperate grasp at carrying on and coping—and seeking hope in the impossible.

Kimberly Belle grew up in Eastern Tennessee, in a small town nestled in the foothills of the Appalachians. A graduate of Agnes Scott College in Decatur, Georgia, Kimberly lived for over a decade in the Netherlands and has worked in marketing and fundraising for various nonprofits. She’s the author of two novels, THE LAST BREATH and THE ONES WE TRUST (August 2015). She divides her time between Atlanta and Amsterdam.