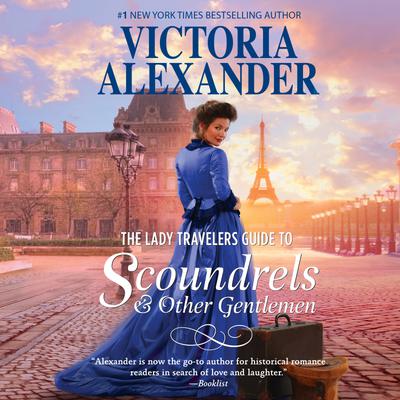 Really, it's too much to expect any normal man to behave like a staid accountant in order to inherit the fortune he deserves to support the lifestyle of an earl. So when Derek Saunders's favorite elderly aunt and her ill-conceivedand possibly fraudulentLady Travelers Society loses one of their members, what's a man to do but step up to the challenge? Now he's escorting the world's most maddening woman to the world's most romantic city to find her missing relative.

While India Prendergast only suspects his organization defrauds gullible travelers, she's certain a man with as scandalous a reputation as Derek Saunders cannot be trusted any farther than the distance around his very broad shoulders. As she struggles not to be distracted by his wicked smile and the allure of Paris, instead of finding a lost lady traveler, India just may lose her head, her luggage and her heart.

New York Times bestselling author Victoria Alexander was an award winning television reporter until she discovered fiction was much more fun than real life. She turned to writing full time and is still shocked it worked out.

Since the publication of her first book in 1995, she has written thirty-one full length novels and six novellas. Find a complete list on her website http://www.victoriaalexander.com and chat with her on facebook https://www.facebook.com/VictoriaAlexandersPlace

The Perfect Wife--originally published in 1996 and reissued in March 2008--hit #1 on the New York Times list. Sixteen of her books are bestsellers hitting the New York Times, USA Today and/or Publishers Weekly bestseller lists. With books translated into more than a dozen different languages she has readers around the world and has twice been nominated for Romance's Writers of America prestigious RITA award. In 2009 she was given a Career Achievement Award from RT Bookclub and was named Historical Storyteller of the year in 2003. In 2008 she was the keynote speaker for the Romance Writers of American annual conference in San Francisco. Victoria credits much of her writing success to her experiences as a reporter.

Her years as a broadcast journalist were spent in two radically different areas of the country: Nebraska and West Virginia. In West Virginia, she covered both natural and manmade disasters. She was on the scene when a power plant construction accident in a small town left 52 men dead. She once spent the night on a mountain waiting to learn of the fate of coal miners trapped in a mine collapse. Victoria was producing a newscast when her husband (who worked at the same television station) and several other journalists were held hostage by a disturbed Vietnam veteran. In Nebraska, she reported on the farm crisis and watched people lose land that had been in their families for generations. She covered the story that was the basis of the movie BOYS DON'T CRY and once acted as the link between police and a gunman who had barricaded himself in his home. Her investigative work exposed the trucking of New York City garbage to a small town dump in rural Nebraska.

During her journalism career, Victoria covered every president from Ford to Clinton. She knows firsthand what it feels like to be surrounded by rising floodwaters and inside a burning building. She's interviewed movie stars including Kevin Costner, ridden an elephant and flown in a governor's helicopter. She's covered a national political convention and Pope John Paul II's historic visit to Denver as well as small town festivals celebrating everything from walnuts to Glen Miller. Her work was honored by numerous organizations including the Associated Press who called a feature about a firefighter's school "story telling genius". It was the encouragement she needed to turn from news to fiction. She's never looked back.

Victoria is a former president of the Omaha Press Club and in 2009 was named an OPC Face on the Barroom Floor. A caricature portrait of her joined previous faces including presidents, sports figures and politicians in a tradition that began in 1971.

Victoria claims her love of romance and journalism is to due to the influence of her favorite comic book character: Lois Lane, a terrific reporter and a great heroine who pursued Superman with an unwavering determination. And why not? He was extremely well drawn.

Victoria grew up traveling the world as an Air Force brat. Today, she lives in Omaha, Nebraska with her husband and her dogs. Victoria had two bearded collies, Sam and Louie (named from characters in one of her books). Sam (on the left), the best dog in the world for 13 ½ years, passed away in September 2010. Louie took on the position of loyal companion and did a fine job even though he doesn't understand that kitchen counter surfing is not allowed! Now he's been joined by Reggie, king of the lilacs.

They all live happily ever after in a house under constant renovation and the accompanying parade of men in tool belts. And never ending chaos. Victoria laughs a great deal--she has to.