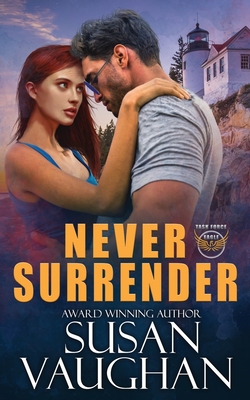 NEW COVER
Part of a series, but a stand-alone novel with its own conclusion. No cliff-hangers.

In hot pursuit
... For years, DEA Agent Ricardo Cruz has pursued El guila, the gun-and-drug-smuggling cartel that killed his older brother. When Rick finally has a lead in Maine, his suspect goes underground and the sister refuses to cooperate. Beautiful Juliana Paris's quick wit and loyalty draw him but he can't afford involvement with his suspect's sister.
With no way back... Because Juliana's father suffered injustice that led to his early death, she intends to find her troubled younger brother and ensure the law treats him fairly. She's determined not to fall for the sexy agent, even if he is dedicated and honorable. Threats by the cartel, who plan to use her to lure out her brother, force her to accept Rick's protection.
The only choice is . . . surrender.... Juliana wants no charmer like the men her mother keeps marrying, and Rick wants no strings. Although attraction sparks between them, the two are at odds and their personalities are polar opposites, but they must work together while evading the thugs. Their hunt for the brother and the cartel's American connection leads them into each other's arms and into deadly danger.

SUSAN VAUGHAN is the multi-published author of romantic suspense novels. Her books have won the Golden Leaf and More Than Magic awards and have been an RT Book Reviews Magazine Reviewer's Choice Nominee and a finalist for the Booksellers' Best and Daphne du Maurier awards. Her books have been translated into German, French, Spanish, and Icelandic and published in more than eleven countries. She's a West Virginia native, but she and her husband have lived in Maine for many years.
or
Buy Here
Copyright © 2020 American Booksellers Association