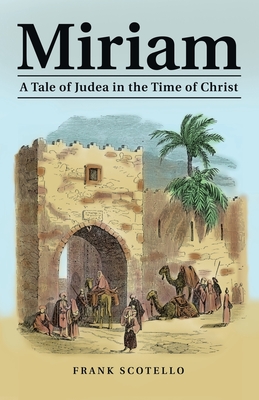 A Tale of Judea in the Time of Christ

Miriam: A Tale of Judea in the Time of Christ tells the story of a young Jewish woman who lives in Judea in the time of the Roman Empire's occupation of that land. Miriam's friends and family know her to be loving, courageous, and devout. They are both surprised and dismayed to watch her fall in love with a Roman centurion. The couple, living at odds with the desires of all who know them, face challenges to their love and, indeed, to their lives. A mysterious third party intervenes, leading the couple down a path to happiness.

Frank Scotello was born the son of an Italian immigrant. The first in his family to attend college, he received a bachelor's degree in English from DePaul University, a master's degree in public service from Western Kentucky, and a master's of English from the University of Chicago. Frank is a retired lieutenant colonel from the U.S. Army. He was an infantry officer and was parachute and Ranger qualified. In the service, he also taught literature and English composition at the U.S. Military Academy at West Point. After retiring in 1991, he taught college English in the Midwest. In 1999, he changed careers and became a journalist. He was named the business editor of a daily newspaper after being a reporter for less than a year. After Sept. 11, 2001, he changed careers again. Because of his business writing, he tried his hand in that field. He became an investment representative and sold stocks and bonds. Frank was married to his college sweetheart, Mary, for 45 years, until she passed in 2016. They have three grown children and eight grandchildren. He has published a number of essays, short stories, and poems. Now fully retired and living in Wisconsin with his wife's little dog, Brutus, Frank provides content for a monthly bereavement newsletter. He enjoys watching television, studying history, reading fiction, and exercising at the gym. He also tries to write-whenever he does not have to shovel snow from his long country driveway or mow his acre of weeds.
Loading...
or support indie stores by buying on