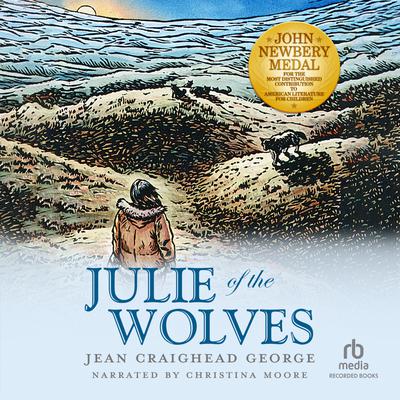 Julie of the Wolves (Digital Audiobook)

"Miyax had been lost without food for many sleeps on the North Slope of Alaska. The barren slope stretches for three hundred miles from the Brooks Range to the Arctic Ocean, and for more than eight hundred miles from the Chukchi to the Beaufort Sea. Winds scream across it, and the view in every direction is exactly the same. Somewhere in this cosmos was Miyax; and the very life in her body, its spark and warmth, depended upon these wolves for survival. And she was not so sure they would help."-from Julie of the Wolves. When Miyax walks out onto the frozen Alaskan tundra, she hopes she is leaving problems at home far behind. Raised in the ancient Eskimo ways, Miyax knows how to take care of herself. But as bitter Arctic winds efface the surface of food, she begins to fear for her life, and turns to a pack of wild wolves for help. Amaroq, the leader of the pack, eventually accepts Miyax as one of his own defenseless cubs, protecting her from danger and saving portions of the daily kill for her. But as Miyax makes her way nearer to civilization, her life with the wolves, as well as all that she has come to learn about herself, are challenged as never before.
Loading...