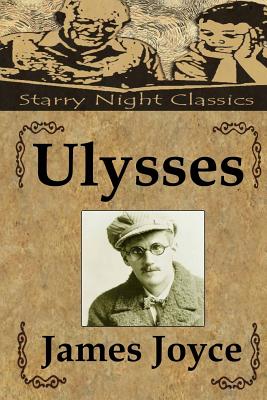 "NUMBER 1 in Modern Library's 100 Best Novels of the 20th Century" "Ulysses is the most important contribution that has been made to fictional literature in the twentieth century." New York Times "Ulysses is perhaps the most written about book ever after the Bible, which should tell you something. It's definitely a better read." The Economist "In the last pages of the book, Joyce soars to such rhapsodies of beauty as have probably never been equaled in English prose fiction." Edmund Wilson, The New Republic "It comes nearer to being the perfect revelation of a personality than any book in existence." --New York Times "To my mind one of the most significant and beautiful books of our time." --Gilbert Seldes, in The Nation "Almost every variety of human experience is crammed into the accordian folds of a single day, which makes Ulysses not just an experimental work, but the very last word in realism." --Amazon.com Review "I have never read anything to surpass it, and I doubt if I have ever read anything to equal it." --Arnold Bennett Two characters, Leopold Bloom and Stephen Dedalus go about their business on a day distinguished by its utter normality. Join us for James Joyce's astonishing masterpiece, written in his unique, stream-of-consciousness style, a book once banned for obscenity, now complete and unedited.

James Augusta Aloysius Joyce was born on February 2, 1882, in Dublin, Ireland, the oldest of ten children in a middle-class family. When he was five, James was attacked by a dog, which left him with a lifelong fear of them. When he was nine, James wrote a poem which his father had published. Later that year, his father lost his job and the family slid into poverty. He attended Jesuit schools for most of his education, but broke from the Catholic religion at the age of sixteen and began studying English, French and Italian at University College Dublin. After graduating, Joyce left for Paris to study medicine, but didn't like it and his father told him to return home when his mother became ill. When she died, he began drinking heavily, scraping a living as a book reviewer, a teacher and a singer, winning a medal in a music festival in 1904, the same year that he married Nora Barnacle. James and Nora ended up in Italy, where he took a position teaching English for ten years. In 1909, Joyce launched the first Irish Cinema, which folded after he left. By 1915, most of his students were drafted to fight in World War I, and he moved to Zurich where he gained a wealthy patron who funded his writing, allowing him to leave teaching. It was during this period that James wrote "Ulysses" and moved to Paris for twenty years. He began to lose his eyesight however, requiring multiple surgeries. In 1941, he underwent surgery for a perforated ulcer and fell into a coma. He did awaken, calling for his family, but he died on January 13, 1941, at the age of 58, in Zurich. He is buried in Fluntern Cemetery in Zurich and is considered to be one of the most influential writers of the 20th Century.
Loading...
or support indie stores by buying on