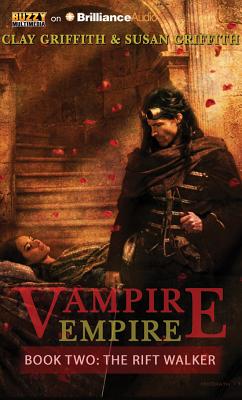 The Rift Walker is the second installment in the Vampire Empire book trilogy. Set in a post-apocalyptic world, this tale of courage, sacrifice, and heroism takes place against the backdrop of an age of steam and rational humanism, where the social elite have rejected religion and spiritualism as nothing more than quaint superstition.

Brutal Vampire Clans rule half the world keeping human herds for food, and Princess Adele, heir to the throne of Equatoria, is faced with grim choices. War is imminent and her marriage to the odious Senator Clark of America will cement an alliance uniting the Equatorian Empire and the American Republic. This integration of war machines is to be the opening volley in the campaign to reclaim the Northern Hemispheres. Unfortunately, Adele's betrothed has a bloodthirsty war strategy, one the Princess finds as repulsive as the actions of the vampires they fight.

Moments in advance of the Princess's marriage to the Senator, the Geryfriar, legendary champion of the human resistance, rescues Adele before vampire assassins can murder her. While on the run from the agents of Prince Cesare, the acting Clan Lord of the Northern Vampires, Adele seeks to discover a way to protect her beloved Equatoria and prevent the genocide Clark intends to implement, all while trying to free herself from an unwanted marriage. Meanwhile, Cesare's agents have struck deep at the heart of Equatoria and will stop at nothing to keep Adele from ascending to the throne.

Treachery abounds; friendship, loyalties, and allegiances are tested. Will Princess Adele be able, with the help of her beloved Greyfriar, her devoted guard and faithful officer Anhalt, and her mentor Mamarou, to turn the tide before human civilization is forever shattered?