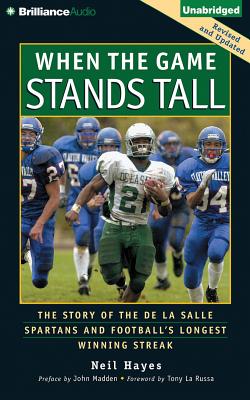 When the Game Stands Tall

By 2002, The Streak--a historic 13-year run of consecutive wins by the Spartans, a high-school football team from Concord, California, that couldn't be beat--was still going strong. In this revised edition of When the Game Stands Tall, author Neil Hayes, who had unrestricted access to the De La Salle team, writes from the inside about the games, the players, and their visionary coach, Bob Ladouceur, who managed to amass the highest winning percentage in football history (.995) through standing for something greater than winning.

The audiobook, which also features interviews with major sports figures like Bill Walsh and John Gruden, is a revealing portrait of the coach who believed above all in instilling basic life skills where winning is not the goal, but merely the byproduct of playing the game. The Streak had become a national story long before it ended in September 2004. In this revised edition, Neil Hayes catches up on the lives of the main characters and takes listeners through the final tumultuous year. What results is a timeless and inspirational story of struggle, tragedy, and triumph.