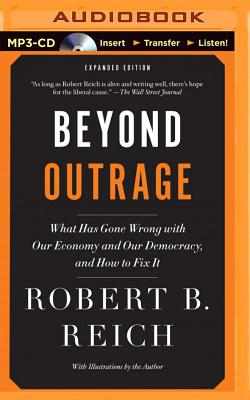 What Has Gone Wrong with Our Economy and Our Democracy, and How to Fix It

America's economy and democracy are working for the benefit of ever-fewer privileged and powerful people. But rather than just complain about it or give up on the system, we must join together and make it work for all of us. In this timely audiobook, Robert B. Reich argues that nothing good happens in Washington unless citizens are energized and organized to make sure Washington acts in the public good. The first step is to see the big picture. Beyond Outrage connects the dots, showing why the increasing share of income and wealth going to the top has hobbled jobs and growth for everyone else, undermining our democracy; caused Americans to become increasingly cynical about public life; and turned many of us against one another. He also explains why the proposals of the "regressive right" are dead wrong and provides a clear roadmap of what must be done instead. Here's a plan for action for everyone who cares about the future of America.