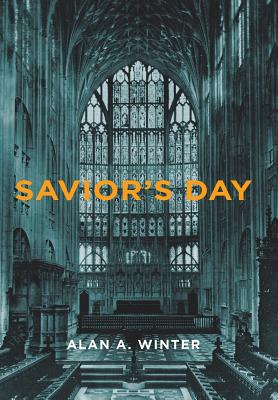 By Alan A. Winter

Savior's Day is a work of fiction taken out of today's headlines. Cardinal Arnold Ford, head of the Archdiocese of New York, witnesses a murder on the steps of St. Patrick's Cathedral. With the old man's dying breath, he hands the Cardinal a sliver of ancient parchment to keep and protect. What follows is a tale woven from an open case that Israel's vaunted spy agency, the Mossad, is afraid to solve. What do they fear? How can the lost pages of an ancient treasure threaten the very existence of the State of Israel?

LeShana Thompkins, the NYPD detective assigned to the homicide, interviews Cardinal Ford. As the investigation unfolds, LeShana is conflicted whether to reveal secrets about the priest's past that his adopted missionary parents hid from him. Ford is stunned. He learns from the Detective who his biological father was, what role his father played in history, and how his own DNA primes the priest for the challenge of a lifetime: to broker a Middle East Peace agreement.

Savior's Day is by turns a suspense thriller that fictionalizes history into a modern-day drama that will keep you at the proverbial edge of your seat. Surprise after surprise leaps off the pages, based on true facts that will amaze.

Across the way, hidden in a minaret all thought safe, secure, and unoccupied, Zakkarhia ibn Mohammed took aim. In moments he would put a hole through the madness centered around these absurd missing pages written on ancient parchment.

And then it happened. Two shots rang out. Pandemonium erupted. In the spit of a flash, soldiers rushed to form a tight ring around the Trinity plus Two. It was too late.

The indelible, unchangeable, irrevocable act occurred on what would be forever known as Savior's Day.