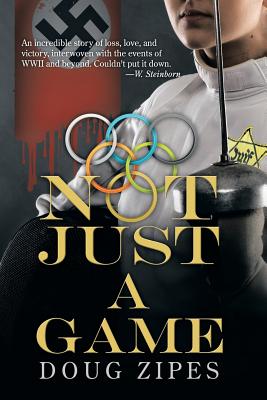 Not Just a Game

It is 1936 as track star Dietrich Becker trains for the Berlin Olympics. Supported by his wife and an unknown benefactor, Dietrich is hiding a dangerous secret: he is Jewish. But when he unexpectedly loses to the legendary Jesse Owens, a humiliated Dietrich crumbles under overwhelming pressure and makes a decision that changes everything.

Thirty-six years later, Dietrich's son, Adam, assistant head of the 1972 Israeli Olympic team, travels to Munich, where eleven Israeli athletes including one of his friends, fencing coach Levi Frankel, are murdered by Islamic terrorists. Eventually Adam's daughter, Kirsten, is taught to fence by Levi's widow and sets her sights on the 2016 Olympics. When she travels to Rio with the Israeli team just as Nazism is reborn, Kirsten and a French fencer become intrigued by rumors that Hitler fled WWII to South America. After visiting Bariloche, Argentina to investigate, they explore Hitler's house and find the priceless Amber Room. As her journey leads her back to the Olympics, Kirsten soon discovers she is fighting not just to win gold but also for her life.

Not Just a Game is the riveting story of three generations of Olympic athletes as they attempt to survive monumental challenges in the shadow of Hitler and during a rebirth of Nazism.