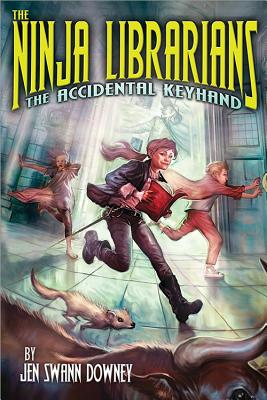 In this swashbuckling middle grade debut, 12-year-old Dorrie Barnes falls through a passage in her local library into the headquarters of a secret society of heroic librarians. Your mission should you choose to accept it: support and promote the unsung heroes of literature, the defenders of the Dewey Decimal system, the freedom fighters of free speech--Ninja Librarians

When Dorrie and her brother Marcus chase an unusually foul-tempered mongoose into the janitor's closet of their local library, they make an astonishing discovery: the headquarters of a secret society of ninja librarians.

Their mission: protect those whose words get them into trouble, anywhere in the world and at any time in history.

Petrarch's Library is an amazing, jumbled, time-traveling secret base that can dock anywhere there's trouble, like the Spanish Inquisition, or ancient Greece, or...Passaic, New Jersey. Dorrie would love nothing more than to join the society, fighting injustice with a real sword But when a traitor surfaces, she and Marcus are prime suspects. Can they clear their names before the only passage back to the twenty-first century closes forever?

Praise for The Accidental Keyhand:
"A rollicking adventure... It's like finding Lara Croft running your local library "--Lissa Evans, author of Horten's Miraculous Mechanisms
"Delightfully funny from the first page...Downey's hilarious debut is perfect for any library-loving reader and those who never considered librarians to be cool."--Booklist
" A] melding of fantasy, adventure, and history... Readers who miss the collegial, magical setting of Hogwarts will enjoy exploring Petrarch's Library."--School Library Journal
" Downey] shows a rare gift for crafting scrambles so madcap that it's hard to turn the pages fast enough to keep up."--Kirkus Starred Review

Jen Swann Downey's nonfiction pieces have appeared in New York Magazine, the Washington Post, Women's Day, and other publications. She's never visited a library in which she didn't want to spend the night. Jen lives in Charlottesville, VA, with her husband and three children and feels very lucky they have yet to fire her.
Loading...
or
Not Currently Available for Direct Purchase