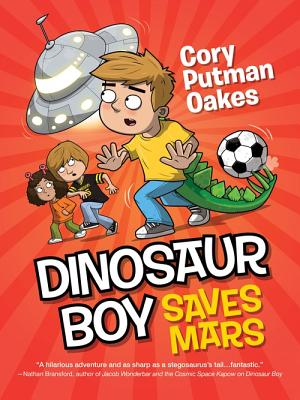 Part-Stegosaurus Sawyer and his two best friends are on a rescue mission to Mars when they encounter bullying of galactic proportions: Mars is trying to kick Pluto out of the solar system. Can the crew brave an interplanetary soccer match, a Plutonian rights organization called BURPS, and a batch of unusually potent tacos to save the galaxy?

When you're part Stegosaurus life can be a little crazy. (Yes, sleeping with plates is weird. No, dino-human hybrids do not have second brains in their butts.) But Sawyer's life is normal(ish)--until he's yanked aboard a UFO and sent on a mission to Mars.

Sawyer, Elliot and Sylvie travel to Mars to find her missing father, but they find even bigger trouble. Mars is trying to kick Pluto out of the solar system. And the fate of both planets will be decided by the upcoming Pluto VS Mars soccer match. Of course.

It's an intergalactic mess, and only Sawyer can save Mars, defend Pluto and protect the galaxy...

"You thought your day at school was rough. Try being half dinosaur. Dinosaur Boy is a hilarious adventure and as sharp as a stegosaurus's tail, with twists and turns on every page...fantastic."--Nathan Bransford, author of Jacob Wonderbar and the Cosmic Space Kapow

"Funny, fast-paced, and filled with surprising twists, Dinosaur Boy is a charming story about friendship, bullies, dinosaurs, and learning to live with being very, very different. The ending will have boys and girls roaring for more of Sawyer's adventures, and possibly wishing for their very own dinosaur genes "--Nikki Loftin, author of The Sinister Sweetness of Splendid Academy and Nightingale's Nest