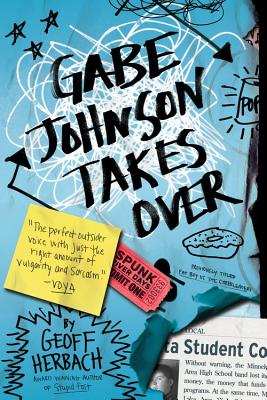 From Geoff Herbach, the award-winning author of the hit young adult novels Stupid Fast and Nothing Special, comes the ultimate underdog story, which will resonate with anyone who has suffered from teasing and bullying at the hands of the high school social hierarchy--and decided to do something about it. (Previously titled Fat Boy vs The Cheerleaders.)

Gabe is having a tough week. Normally the funny kid at the lunch table, he's on edge from trying to kick his soda addiction. So when news breaks that his beloved marching band camp has been cancelled due to lack of funding, he's furious. What makes him even madder? The school's vending machine money--which had previously been collected by the band--is now sponsoring the new cheer squad.

The war is ON. And Gabe is leading the charge. No one will be safe from the Geekers' odd brand of wrath: not the principal, the band teacher, the local newspaper, and certainly not the cheerleaders and their jock boyfriends. Get ready: Life at Minnekota Lake Area High School is about to change. Gabe Johnson is taking over.

A funny, uplifting, and rousing book that'll make readers think. In other words, it's a real gem. --K. M. Walton, author of Cracked and Empty