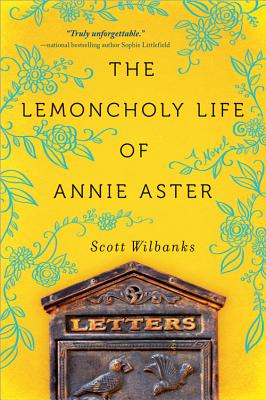 The Lemoncholy Life of Annie Aster

Annabelle Aster doesn't bow to convention--not even that of space and time--which makes the 1890s Kansas wheat field that has appeared in her modern-day San Francisco garden easy to accept. Even more peculiar is Elsbeth, the truculent schoolmarm who sends Annie letters through the mysterious brass mailbox perched on the picket fence that now divides their two worlds.

Annie and Elsbeth's search for an explanation to the hiccup in the universe linking their homes leads to an unsettling discovery--and potential disaster for both of them. Together they must solve the mystery of what connects them before one of them is convicted of a murder that has yet to happen...and yet somehow already did.

If you had Annie’s time portal, when and where would you go?

Who is your favorite character in the novel? Why?

Imagery adds depth to the written word in literature. There are several repeated images in the book, one of which is that of a crow. Did you notice any other significant images? What might they mean?

Roses, particularly, have been a bonanza for symbologists throughout history. What do roses represent to you? What do you think these roses that appear behind Annie’s house represent?

Déjà vu is defined as the illusion of having previously experienced something. Christian fears that he may have met Edmond before but doesn’t remember. In the end, did he experience déjà vu, or was it more complicated than that?

As a society we are undeniably judgmental about drug abuse. Did your impression of Edmund change when you became aware that he struggled with drug addiction? Why or why not?

The novel is, at its heart, a novel about five misfits — Annie, Elsbeth, Cap’n, Christian, Edmond — that explores the concept of marginalization through their experience. What do you think were the qualities or circumstances that led to each of the protagonists’ marginalization?

Edmund says, “It’s not sin, what’s inside of you. I promise you, it’s not.” His comment addresses one of today’s hot-button topics —homosexuality as a sin. Is it? Do you think homosexuality is a choice?

Does our concept of what constitutes sin evolve over time as we gain better understanding of the forces behind it?

In the novel, the author toys with the concept of fate as a physical force of the universe, not unlike gravity. Just to make things complicated (he loves complications), he stirred in two other powerful forces —love and time —binding the three together. Which of these three forces —love, time, or fate—played the greatest role in uniting Annie and El? Which of these forces played the greatest role in uniting our other protagonists?

Courage and sacrifice often go hand in hand. Annie begs Christian to find his courage and be true to himself, and he does, but he has to sacrifice everything he was taught to do so. What other acts of courage did you find in the book, and sacrifices did they require?