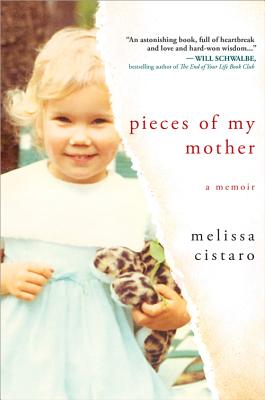 Pieces of My Mother

“Cistaro's story begins with the last days of her mother's life, 35 years after she abandoned her children and husband with no explanation. Cistaro is still seeking the truth and the one answer that she feels she needs most desperately - why did her mother leave? What is most impressive about this memoir is the honesty with which the author details her own anxieties, and readers will relate to her and cheer her on when she makes an important, life-changing decision. This is an amazing story of forgiveness, connection, understanding, and grace.”
— Lynn Riehl (E), Nicola's Books, Ann Arbor, MI
View the List

"A story that lingers in the heart long after the last page is turned." --HOPE EDELMAN, bestselling author of Motherless Daughters and The Possibility of Everything

This provocative, poignant memoir of a daughter whose mother left her behind by choice begs the question: Are we destined to make the same mistakes as our parents?

One summer, Melissa Cistaro's mother drove off without explanation Devastated, Melissa and her brothers were left to pick up the pieces, always tormented by the thought: Why did their mother abandon them?

Thirty-five years later, with children of her own, Melissa finds herself in Olympia, Washington, as her mother is dying. After decades of hiding her painful memories, she has just days to find out what happened that summer and confront the fear she could do the same to her kids. But Melissa never expects to stumble across a cache of letters her mother wrote to her but never sent, which could hold the answers she seeks.

Haunting yet ultimately uplifting, Pieces of My Mother chronicles one woman's quest to discover what drives a mother to walk away from the children she loves. Alternating between Melissa's tumultuous coming-of-age and her mother's final days, this captivating memoir reveals how our parents' choices impact our own and how we can survive those to forge our own paths.

Melissa’s mother had an entire cache of letters that she never sent; do you have letters or thoughts that you never sent to someone?

What did you think of Melissa’s mother at the beginning of the book? What about the end, once you learned more about her?

Pieces of My Mother moves back and forth from Melissa’s childhood to present day. Did you like/dislike this narrative element?

What did you think of Melissa’s brothers, and their relationship with their mother? Do you think it was different than the relationship that Melissa had with her mother?

Melissa’s mother periodically returns while her children are growing up. Which visit was most memorable to you and why?

Throughout most of Melissa’s life, her mother remains a mystery that she constantly tries to piece together. Is there someone like that from your life?