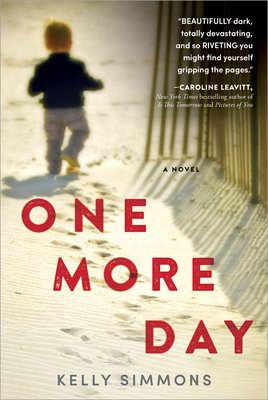 "Beautifully dark, totally devastating and so riveting you might find yourself gripping the pages"--Caroline Leavitt, New York Times bestselling author of Is This Tomorrow and Pictures of You

No one wants to be the mother whose child disappears. It's unthinkable, every parent's worst nightmare. But when she turns her back to pay a parking meter, Carrie Morgan becomes that mother. Ben is gone, and more than a year later, it's clear that he is never coming back.

Until he does...for just twenty-four hours, before once again vanishing from his crib without a trace. Rumors start to circulate through Carrie's small town. Whispers that she's seeing things. That her alibi doesn't quite add up.

A perfect beach read, One More Day is a twisty thriller that picks at every parent's worst nightmare and unravels it into a chilling novel of well-kept secrets and doubt.

Also by Kelly Simmons:
Where She Went
The Fifth of July