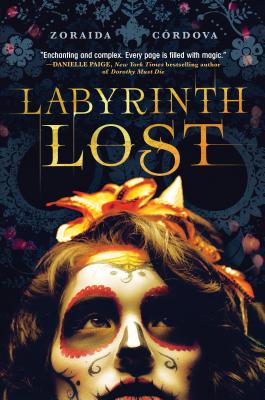 The first book in the Latinx-infused Queer fantasy series from Zoraida Córdova, highly acclaimed author of The Inheritance of Orquídea Divina, that follows three sisters—and teen witches—as they develop their powers and battle magic through epic questing in the realms beyond.

Alex is a bruja and the most powerful witch in her family. But she's hated magic ever since it made her father disappear into thin air. So while most girls celebrate their Quinceañera, Alex prepares for her Deathday—the most important day in a bruja's life and her only opportunity to rid herself of magic.

But the curse she performs during the ceremony backfires, and her family vanishes, forcing Alex to absorb all of the magic from her family line. Left alone, Alex seeks help from Nova, a brujo with ambitions of his own.

To get her family back they must travel to Los Lagos, a land in-between, as dark as Limbo and as strange as Wonderland. And while she's there, what she discovers about herself, her powers, and her family, will change everything...

Perfect for fans of:

A Bustle Best Book of 2016 Selection

A Paste Magazine Best Books of 2016

"Córdova weaves Latin American religions and cultures, spellbound creatures, and a bit of a love triangle into her unique world. This one is sure to intrigue lovers of fast-paced fantasy" — School Library Connection

"Zoraida Córdova's stunning storytelling and wondrous world-building make this one to remember, and bonus: there's a multicultural, bisexual love triangle to give you the swoons." — Bustle.com

"Cordova concocts a vivid urban fantasy that infuses elements from Latin American folk traditions and mythology into the lives of contemporary teens... While Alex may have conflicted feelings about magic, this first book in the Brooklyn Brujas series leaves readers with no similar misgivings; they'll want more." — The Chicago Tribune

"This was a unique and interesting twist on magic from a cultural perspective that I am not very familiar with. It was fascinating, dark and compelling. I highly recommend it." — SLJ Teen Librarian Toolbox

"Dark enchantment in a witchy coming-of-age tale...Labyrinth Lost, brings a new perspective to the fantasy genre. Drawing on her Ecuadorian heritage, Córdova tells a story that is both culturally new yet hauntingly familiar." — BookPage

"Fans of darker YA filled with adventure will definitely enjoy this read." — BuzzFeed

"Brujas! Family love! Creepy monsters! Girls who love girls! A boy made of sunlight! Zoraida Cordova's Labyrinth Lost was a fun and fast-paced venture through another world. After trying to eradicate her magic during her Deathday celebration, bruja Alex is forced into Los Lagos to rescue her family. Alex's quest is as much a poignant discovery of herself and her place in the world as it is about saving her family, and combined with a beautiful splash of romance, made for the perfect summer fantasy read." — Nicole Brinkley, Book Riot

"Although YA readers will likely be used to books featuring magic, Córdova has created something distinct with cantos, Deathday celebrations and the fantastical in-between realm of Los Lagos. Córdova's rich exploration of Latin American culture, her healthy portrayal of bisexuality and her unique voice allow this novel to stand out among its many peers. 4 Stars." — RT Book Reviews

"This succeeds with its lush use of Latin American mythologies, an unexpected love story, and, above all, in Alex's complicated relationship with her family. Alex is a necessary heroine, and this dark fantasy nicely paves the way for a sequel." — Booklist

"Córdova pulls elements from Greek mythology and Spanish and Latin American legends to craft a memorable world in Los Lagos, a supernatural realm that is as fascinating as it is threatening. The history and customs of Alex's family's type of witchery are also carefully constructed, giving readers a complete world to sink into with satisfaction and wonder. " — Bulletin of the Center for Children's Books

"This work is a magical journey from start to finish... A compelling must-have for teens." — School Library Journal, starred review

"First in the Brooklyn Brujas series, Córdova's (the Vicious Deep series) magic-infused, delightfully dark story introduces readers to an engrossing, Latin American–inspired fantasy setting and an irresistible heroine who longs to be "normal" and pines for the father that left their family behind years ago. A final twist will leave readers eager to revisit Córdova's immersive world." — Publishers Weekly

"Labyrinth Lost is more like reading Paradise Found. Zoraida Córdova brings us a new generation of witches, enchanting and complex. And every page is filled with magic." — Danielle Paige, New York Times bestselling author of Dorothy Must Die

"Córdova's world will leave you breathless, and her magic will ignite an envy so green you'll wish you were born a bruja. Delightfully dark and enchanting. An un-putdownable book." — Dhonielle Clayton, author of The Belles and Shiny Broken Pieces

"Labyrinth Lost is a magical story of love, family, and finding yourself. Enchanting from start to finish" — Amy Tintera, author of Ruined.

"Magical and empowering, Labyrinth Lost is an incredible heroine's journey filled with mythos come to life; but at its heart, honors the importance of love and family." — Cindy Pon, author of Serpentine and Silver Phoenix

Zoraida Córdova is the author of the award-winning Brooklyn Brujas series and The Vicious Deep trilogy. Her short fiction has appeared in Star Wars: From a Certain Point of View, and Toil & Trouble: 15 Tales of Women and Witchcraft. She is the co-editor of Vampires Never Get Old, a YA anthology forthcoming from Imprint/Macmillan in fall 2020. Her upcoming YA novels include Star Wars: A Crash of Fate, and Incendiary, book one in the Hollow Crown duology (Disney/Hyperion 2020). Zoraida was born in Ecuador and raised in Queens, New York. When she isn't working on her next novel, she's planning her next adventure.
Loading...
or support indie stores by buying on
(This book is on backorder)