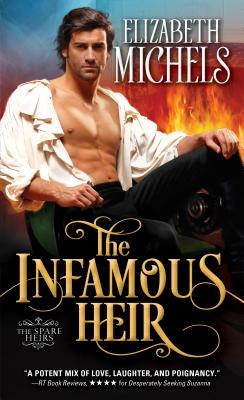 Named a Best Romance of the Month by The Washington Post:
Historical romance devotees will enjoy Michels's adoring use of some of the classic tropes of the genre--the spare heir, the wrong brother as hero, the heroine in men's clothing--but what makes the book so enjoyable is the way Michels makes the familiar fresh.--SARAH MACLEAN, The Washington Post

The Spare Heirs Society Cordially Invites You to Meet Ethan Moore: The Scoundrel
Lady Roselyn Grey's debut has finally arrived, and of course, she has every flounce and flutter planned. She'll wear the perfect gowns and marry the perfect gentleman...that is, if the formerly disinherited brother of the man she intends to marry doesn't ruin everything first.

Ethan Moore is a prize-fighting second son and proud founding member of the Spare Heirs Society--and that's all he ever should have been. But, in an instant, his brother's noble title is his, the eyes of the ton are upon him, and the lady he's loved for years would rather meet him in the boxing ring than the ballroom.

He's faced worse. With the help of his Spare Heirs brotherhood, Ethan's certain he can get to the bottom of his brother's unexpected demise and win the impossible lady who has haunted his dreams for as long as he can remember...

Praise for Elizabeth Michels:
Michels's latest is the complete package: a captivating romance with gripping suspense wrapped up in a novel to be savored.--Publishers Weekly STARRED for The Infamous Heir
Rich with wit and charm.--Publishers Weekly on How to Lose a Lord in 10 Days or Less
Michels' fresh and funny debut will delight readers with its endearing characters and infectious mix of sweet yet sexy romance and realistic yet wry wit.--Booklist Online STARRED on Must Love Dukes