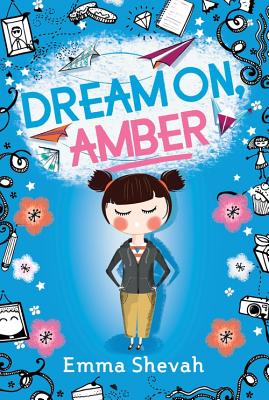 My name is Amber Alessandra Leola Kimiko Miyamoto.
I have no idea why my parents gave me all those hideous names but they must have wanted to ruin my life, and you know what? They did an amazing job.

As a half-Japanese, half-Italian girl with a ridiculous name, Amber's not feeling molto bene (very good) about making friends at her new school.

But the hardest thing about being Amber is that a part of her is missing. Her dad. He left when she was little and he isn't coming back. Not for her first day of middle school and not for her little sister's birthday. So Amber will have to dream up a way for the Miyamoto sisters to make it on their own...

Great for parents and educators looking for:

Praise for Dream On, Amber:
"Funny, poignant...[a] wise and accessible read for 9- to 12-year-olds."—The Wall Street Journal
"'Dream On, Amber' also does something unusual for a children's book that grapples with race: It does not solve Amber's biracial identity crisis. Though Amber struggles with the questions of her missing father and Japanese identity, the biggest lesson of this book is that sometimes there are no answers."—The New York Times
"One of those books that you simply won't want to put down...five out of five stars!"—The Guardian
"[A] beautifully written story."—The Independent


Praise For Dream on, Amber…

"[This] novel is a charmer...While its humor and illustrations lend it Wimpy Kid appeal, its emotional depth makes it stand out from the pack. Molto bene!" — Booklist, starred review

"DREAM ON, AMBER is a strong example of contemporary realistic fiction. It addresses modern topics, such as fitting in, bullying and growing up, that many readers will be able to relate to. Amber is a unique and relatable voice for what it means to have a multicultural background. The novel also provides insight into single parent households and the impact this may have on the children in the family. " — KidsReads

"Shevah tenderly captures the void of growing up without a father yet manages to create a feisty, funny heroine. Crawford-White's whimsical pen-and-ink illustrations line the margins, as if Amber herself has added the doodles. Chapters are numbered in English, Italian, and Japanese, reflecting Amber's multicultural identity, but refreshingly, that identity does not drive the plot. A gutsy girl in a laugh-out-loud book that navigates tough issues with finesse." — Kirkus Reviews

"Amber's effervescent and opinionated narration captivates from the start, making it easy to root for her as she strives to conquer the "beast" of her worries and thrive at home and at school." — Publishers Weekly, starred review

"Amber's authentic voice (including snort-worthy hyperbole and preteen melodrama balanced with tender moments of self-reflection) will resonate with kids, Shevah breathes life into this middle schooler, her lively family members, and her classmates and teachers. Amber confronts racial insensitivities (for example, students comment on her "exotic" appearance and ask her to "say something in Japanese") with frankness and realistic annoyance. The conversational, first-person narration is enhanced by black-and-white doodles throughout... By turns playful and poignant, in both style and substance, this coming-of-age novel will hook readers from the first page to the last." — School Library Journal, starred review

"Funny, poignant...In pages that Helen Crawford-White has ornamented with preteen-style drawings (our heroine is a talented artist), Amber recounts her cockamamie scheme to hearten Bella, how it all goes awry, and how it yet deepens her small family's bonds of love in this wise and accessible read for 9- to 12-year-olds" — The Wall Street Journal

"Emma Shevah's "Dream On, Amber" is narrated in a spunky, endearing voice by Amber ­Miyamoto...Though "Dream On, Amber" is ripe with opportunities for didacticism, ­Amber's appealingly oddball voice makes the lessons go down easy. "Dream On, Amber" also does something unusual for a children's book that grapples with race: It does not solve Amber's biracial identity crisis. Though Amber struggles with the questions of her missing father and Japanese identity, the biggest lesson of this book is that sometimes there are no answers." — The New York Times

"An entertaining, largely unsentimental look at a girl who, as best she can, makes peace with both the family members she has around and the ones who sadly aren't...Amber Miyamoto and her younger sister navigate his absence with a little hope and a lot of panache." — Shelf Awareness

"Amber makes an approachable and admirable guide through questions of identity encountered by many tween readers...the final product, with its message of love, self-acceptance, and forgiveness (with an inviting layout of big print sprinkled with lots of margin art) is like one of those cakes with beets snuck in: sweet, tasty, and surprisingly nourishing" — Bulletin of the Center for Children's Books

"Amber tackles some tough questions and issues that middle graders face, and she does it with Judy Blume-esque humor, with a touch of Dork Diaries/Diary of a Wimpy Kid slapstick...I loved this book and how it uses humor to take the sting out stressful situations facing kids these days." — Mom Read It

Emma Shevah is half-Irish and half-Thai and was born and raised in London but now lives in Brighton, England. She runs the literary club at New York University in London and teaches English at Francis Holland School. Her novel Dream On, Amber received a 2017 Odyssey Honor Award for best audiobook produced for children and/or young adults. Visit Emma at emmashevah.com.
Loading...
or
Not Currently Available for Direct Purchase