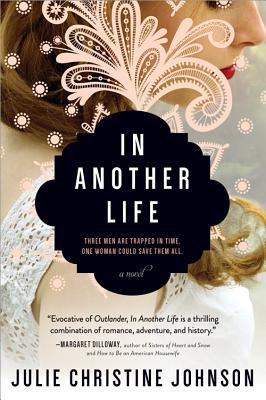 "Johnson is clearly striding in the footsteps of authors like Geraldine Brooks and Diana Gabaldon in her juxtaposition of the modern and historical."—New York Journal of Books

Three men are trapped in time. One woman could save them all.

Historian Lia Carrer has finally returned to southern France, determined to rebuild her life after the death of her husband. If nothing else, her trip could grant her perspective on the region's traditional reincarnation beliefs and resurrect her dying thesis.

But instead of finding solace and insight in the region's quiet hills and medieval ruins, Lia falls in love. Raoul's very existence challenges everything she knows about life, history, and her husband's death. As Raoul reveals the story of his past to Lia, she's caught up in the echoes of a historic murder, resulting in a haunting and suspenseful journey through the romantic landscape of the Languedoc region.

A remarkable and richly-developed novel, in the tradition of time-travel romances by Susanna Kearsley and Diana Gabaldon, In Another Life masterfully blends historical fiction with a love that conquers time.


Praise For In Another Life…

"Johnson's heartbroken researcher wends through the lush landscape and historical religious intrigue of southern France seeking the distraction of arcane fact—but instead, like the reader, is transformed by the moving echo of emotional truth. An imaginative, unforgettable tale." — Kathryn Craft, author of The Art of Falling and The Far End of Happy

"Delicate and haunting, romantic and mystical, In Another Life is a novel with an extraordinary sense of place. Fans swept away by Diana Gabaldon's 18th-century Scotland will want to explore Julie Christine Johnson's 13th-century Languedoc." — Greer Macallister, author of The Magician’s Lie

"In this lovely novel, Johnson shows us the redemptive power of love and second chances through the ages. Evocative of Outlander, In Another Life is a thrilling combination of romance, adventure, and history." — Margaret Dilloway, author of Sisters of Heart and Snow and How to Be an American Housewife

"Debut author Johnson handles what could be an overwhelming amount of historical details with skill, presenting a fascinating mystery grounded in historical fact. Her lyrical, sensuous style is beguiling in its own singularly seductive way. Readers can practically taste the ever-present wine and feel the winter wind. Lia is a dream of a narrator, one whom readers will root for. A perfect match for readers who enjoy Kate Mosse’s "Languedoc Trilogy" and fans of female-driven romantic historical works such as Diana Gabaldon’s "Outlander" series." — Library Journal

"Johnson’s novel is beautifully written. It centers around Lia and her return to France, moving seamlessly between present and past, blending mystery, romance and rich history together. Johnson brings the 800-year-old Cathar religious persecution to life with vibrant characters who appear to be reincarnated in the men surrounding Lia in the present day." — RT Book Reviews, 4 Stars

"In Another Life grabs you from page one and doesn't let go. The prose is rich and evocative, transporting the reader to rural France with an ease unusual for a debut author. Very highly recommended." — Historical Novels Review, Editor’s Choice

"what makes "In Another Life" work is the strong emotional core, the sense of place, the historical suspense and the characterization that makes the reader root for Lia" — Seattle Times

Julie Christine Johnson’s work has appeared in several anthologies and literary journals. She lives and writes in the seaside village of Port Townsend in northwest Washington state.