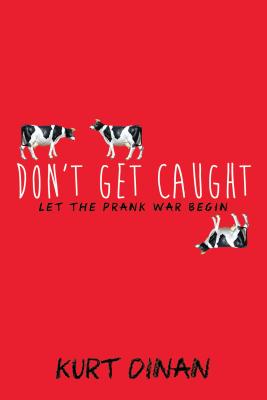 Oceans 11 meets The Breakfast Club in this funny book for teens about a boy pulled into an epic prank war who is determined to get revenge.

When Max receives a mysterious invite from the untraceable, epic prank-pulling Chaos Club, he has to ask: why him? After all, he's Mr. 2.5 GPA, Mr. No Social Life. He's Just Max. And his favorite heist movies have taught him this situation calls for Rule #4: Be suspicious. But it's also his one shot to leave Just Max in the dust…

Yeah, not so much. Max and four fellow students—who also received invites—are standing on the newly defaced water tower when campus security "catches" them. Definitely a setup. And this time, Max has had enough. It's time for Rule #7: Always get payback.

Perfect for readers who want:

Praise for Don't Get Caught:

"Genre-savvy, clever, and full of "Heist Rules"…this twisty tale is funny, fast-paced, and full of surprises. Fans of Ocean's 11 or Leverage…will find a great deal to enjoy in Dinan's debut."—Publishers Weekly

"Not only is Don't Get Caught the best kind of underdog story—heartfelt and hilarious—but it's filled with genuine surprises up until the very last page, which features one of my favorite endings in recent memory. I'm highly inspired to prank someone right now." –Lance Rubin, author of Denton Little's Deathdate

"Witty, charming and always surprising...Call it Ocean's 11th Grade or whatever you like, Don't Get Caught snatched my attention and got away clean." –Joe Schreiber, author of Con Academy and Au Revoir Crazy European Chick


Praise For Don't Get Caught…

"Genre-savvy, clever, and full of "Heist Rules" like "If questioned, be evasive" and "Play to your crew's strengths," this twisty tale is funny, fast-paced, and full of surprises. Newcomer Dinan brings in numerous classic heist elements, including sleight-of-hand, code names, flashback sequences (to show what really happened along the way), and elaborate schemes, leading to one revelation after another. Fans of Ocean's 11 or Leverage—properties Max himself holds dear in his personal playbook—will find a great deal to enjoy in Dinan's debut." — Publishers Weekly

"Teen readers will delight in the way such totally different individuals begin to cooperate to triumph over their wrongs." — VOYA Magazine

"Funny, clever, and playful, this debut is an enjoyable romp that pairs high-stakes cons with a ragtag gang of highschool misfits." — Booklist

Kurt Dinan is a high school English teacher. He’s had several short stories published, including one in 2010’s The Year’s Best Dark Fantasy and Horror. He lives in Cincinnati, Ohio, with his wife, three young sons, and baby girl. Don’t Get Caught is his first novel.