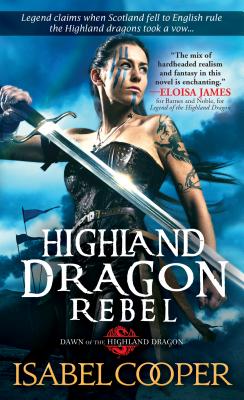 By wing, by claw

By fire, by death

So long as dragons rule the skies, Scotland will forever be free.

After a long and bloody war, Scotland has finally won its independence. But Highland dragon Moiread MacAlasdair knows peace balances on the edge of a rebel blade, and she will do anything to keep her homeland from falling to English control.

Even if that means escorting a powerful new ally into the otherworld itself…and defending him with her life.

Madoc of Avandos is on a critical mission to cement alliances against the British. Powerful men would kill to see him fail—but as he and his fiercely beautiful warrior fight their way through hostile lands, Madoc is faced with a difficult choice: sacrifice everything for the cause…or let himself burn for the love of a dragon.

A Highlander romance with a fantasy twist, readers are entranced by Isabel Cooper's Highland Dragon series:

"The mix of hard-headed realism and fantasy in this novel is enchanting."—ELOISA JAMES for Barnes and Noble Reviews for Legend of the Highland Dragon

"Will keep you turning pages until you reach the very end."—Book Riot for Highland Dragon Master

"Smartly written, fast-paced, and brimming over with magic and surprises, this is exactly what readers crave."—RT Book Reviews, 4½ Stars, TOP PICK, for Night of the Highland Dragon

"Something magical happens when elements of romance and fantasy combine. Cooper’s delicious Highland Dragon Rebel has it all, including a strong heroine, intriguing hero, heated sensuality and thrilling action/adventure. " — RT Book Reviews

Isabel Cooper lives in Boston with two thriving houseplants. During the day, she maintains her guise as a mild-mannered project manager working in legal publishing. None of the houses she's lived in has been haunted, although one of her former roommates might have dated a zombie. For more visit isabelcooper.wordpress.com.