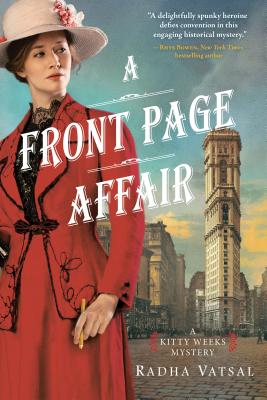 "This lively and well-researched debut introduces a charming historical series and an appealing fish-out-of-water sleuth who seeks independence and a career in an age when most women are bent on getting married, particularly to titled Englishmen. Devotees of Rhys Bowen's mysteries will enjoy making the acquaintance of Miss Weeks"—Library Journal, STARRED Review

The Lusitania has just been sunk, and headlines about a shooting at J.P. Morgan's mansion and the Great War are splashed across the front page of every newspaper. Capability "Kitty" Weeks would love nothing more than to report on the news of the day, but she's stuck writing about fashion and society gossip over on the Ladies' Page—until a man is murdered at a high society picnic on her beat.

Determined to prove her worth as a journalist, Kitty finds herself plunged into the midst of a wartime conspiracy that threatens to derail the United States' attempt to remain neutral—and to disrupt the privileged life she has always known.

"An impressively well written and consistently compelling read from beginning to end, Radha Vatsal's "A Front Page Affair" is the first book in what is justifiably expected to be an outstanding series featuring rising journalism star Kitty Weeks. " — Midwest Book Review

"This first in a planned series is a nice combination of mystery and thriller seasoned by historical facts and a look at women's lives before woman's liberation. " — Kirkus Reviews

"This lively and well-researched debut introduces a charming historical series and an appealing fish-out-of-water sleuth who seeks independence and a career in an age when most women are bent on getting married, particularly to titled Englishmen. Devotees of Rhys Bowen’s mysteries will enjoy making the acquaintance of Miss Weeks." — Library Journal-STARRED

"[A] spirited debut…Vatsal deftly intertwines the tumult of the era, from emerging women’s rights to spreading international conflict, into this rich historical." — Publishers Weekly

"This is a well-thought-out mystery novel, combining historical fiction and feminism with a determined and brave protagonist ready to chart new mysteries and new paths for herself." — Mystery Scene

"Radha Vatsal‘s debut, A FRONT PAGE AFFAIR, doesn’t read like a first novel. First novels aren’t supposed to be this self-assured, or detailed, or full of three-dimensional characters (both real and fictional) who vividly bring the 1910s to life." — The Thrill Begins

"Reading a well-crafted historical mystery is always a pleasure and with A FRONT PAGE AFFAIR, Radha Vatsal delivers precisely that. " — The Big Thrill

"I do like the characterization of Kitty, as it is a very realistic view of a young woman trying to find herself and her way. I see great potential for this character growing, and can see this series getting tighter. " — My Novelesque Life

"The story line is fantastic and had me intrigued right to the end. It makes an easy read and flows beautifully. " — Corinne Rodrigues

"Rich with period detail and cameos from a few historical figures, A Front Page Affair is an appealing beginning to Kitty Weeks and her world...the novel's strength lies in its exploration of complicated wartime politics, and the difference between neutrality and innocence. " — Shelf Awareness for Readers

"A good read and a satisfying conclusion." — Washington Independent Review of Books

"The author obviously enjoys this historical period, and historical trivia was sprinkled throughout the story and created a vivid setting...overall, I'd recommend this enjoyable novel. " — Genre Reviews

"The author’s skill at weaving an entertaining mystery and intertwining it among the strings of an historical setting is quite good. The story wends its way as quickly as Kitty does through the streets of Old New York in her bright yellow Bearcat. Scattered in with the unraveling of the murder are interesting details about the city, world events, and life during that period. Their inclusion is deftly handled, and seems to fit in rather well with the narrative." — Better After 50

"A thoughtful, evocative debut set in New York during the early days of WWI, Vatsal’s Kitty Weeks makes for a fun and refreshing protagonist readers will enjoy following throughout the series." — BookBub Blog

"It is very rare to find a debut novel so well written and so engrossing. The Front Page Affair is on a par with the Maisie Dobbs novels, and I encourage Ms. Vatsal to write, write, and write some more! " — J. Roslyn’s Books

"A compelling mystery, part of the author’s Kitty Weeks series, featuring Kitty Weeks, journalist-turned-detective, who dives into the world of war espionage when a man is murdered on her beat." — BookRiot

Radha Vatsal grew up in Mumbai, India, and came to the United States to attend boarding school when she was sixteen. She has stayed here ever since. Her fascination with the 1910s began when she studied women filmmakers and action-film heroines of silent cinema at Duke University, where she earned her Ph.D. from the English Department. A Front Page Affair is her first novel. Radha lives with her husband and two daughters in New York City.